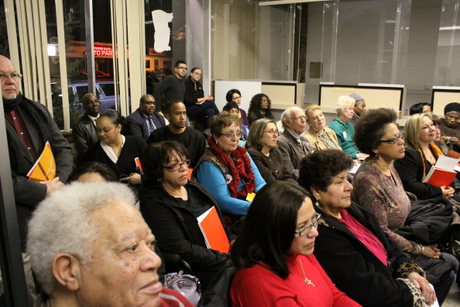 What: Leaders from the African-American, Latino, and immigrant communities to present testimony denouncing the state redistricting task force’s proposals.

Following Monday night’s overflowing community forum on redistricting in Brentwood, leaders from Long Island’s communities of color will appear at the New York State Legislative Task Force on Demographic Research and Reapportionment (LATFOR) hearing to raise their objections to LATFOR’s proposed Senate and Assembly maps. Latino, immigrant, and African-American leaders will denounce LATFOR’s proposals for threatening to divide their communities and dilute their voting power.

On Monday, over 100 community members—representing over 25 community organizations from the Latino, African-American, Haitian, and Muslim communities—came together to discuss the current redistricting process and its implications for Long Island’s communities of color at a forum hosted by the Long Island Civic Engagement Table, Long Island Wins, and Noticia. Their message was clear: LATFOR’s proposed maps will disenfranchise these communities, and residents must demand that the maps be revised, and likely vetoed, to ensure these communities fair political representation.

Frank Sprouse, a member of Make the Road New York and Brentwood resident, stated, “the LATFOR maps exemplify how politicians in office want to abuse that power and take advantage of communities of color to uphold their interests over ours. These maps want to divide the Latino and African American communities of Brentwood and Central Islip by undermining and dissolving our power as an electoral bloc. We have come together to stop that!”

Kevin Nelson, a member of New York Communities for Change and Central Islip resident, added: “Our founding fathers created our country on the basis of one person, one vote, which, by extension should lead to communities of similar sizes being counted equally in the political process. But by splitting up a community like Brentwood into different districts under the proposed Senate redistricting plan, LATFOR would dilute the power of communities of color and violate the equality our founding fathers envisioned.”

Luis Valenzuela, executive director of the Long Island Immigrant Alliance, asserted: “Monday’s forum powerfully demonstrated the Latino and African American communities’ political ascendancy on Long Island. The Latino community can no longer be taken for granted. The new LATFOR maps continue to dilute our vote, and we demand a fair revision. Failing that, we expect the governor to veto the maps.”

At Thursday’s hearing, leaders from a panoply organizations representing Long Island’s communities of color will join together to testify against LATFOR’s proposals. They will highlight how the maps divide areas like Central Islip, Brentwood, and North Bay Shore—dividing “communities of interest” and diluting the potential political power of minority voting blocs. As Patrick Young, program director of the Central American Refugee Center (CARECEN), notes: “The Brentwood, Central Islip, North Bay Shore area looks like one community from my Brentwood Road office. Why doesn’t it from Albany?” Instead of reflecting the growing Latino, immigrant, and African-American population, LATFOR’s proposals—particularly the Senate map—make it harder for these communities to influence the election of candidates who are responsive to their needs.

The Long Island Civic Engagement Table (LICET) seeks to transform the culture of civic participation and government accountability on Long Island. LICET does this by nurturing grassroots participation and leadership in low-income communities of color. LICET, led by Make the Road New York, New York Communities for Change, the Long Island Immigrant Alliance, and CARECEN, works with these communities to turn the tide of anti-working class and anti-immigrant politics and build a common platform for low-income people.