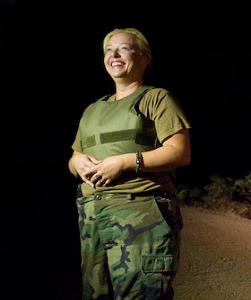 At the Tucson murder trial of Minuteman leader Shawna Force this week, the prosecution presented evidence allegedly generated by Forde: Text messages from Forde’s phone, letters she sent to supporters from jail, and DNA evidence linking her to the crime scene were all introduced into evidence.

More than two dozen text messages sent between Forde’s phone and the phone of Albert Gaxiola, who is accused of being a participant in the home invasion that led to the killings of Brisenia and Raul Flores, were read aloud in court, as were notebook entries and texts allegedly written by the participants in the home invasion, which prosecutors say was orchestrated by Minuteman American Defense.

Pima County Detective Juan Navarro testified that during a search of Gaxiola’s house after the killing, detectives found a notebook with the words “Green light Jr.” written in it.

According to a report in the Arizona Star:

Navarro also introduced letters written by Forde from jail asking people to tell authorities that the recipients had given her jewelry that was stolen from the Flores home, and later found in her vehicle.

…[A]t 2:41 a.m. someone using Forde’s phone texted Gaxiola this message: “Can u stop and get few rolls of gauze and compress bandages, big ones, at a 24-hour store?”

Whoever had Gaxiola’s phone texted back they are welcome to use his towels, but he’s having car problems. The texter eventually said he spent the night in the car.

At 6:08 a.m., someone using Forde’s phone texted her daughter, Jaszmin Eddy, saying, “Whatever goes down, I’m in deep, know that I love you.” The text urged Jaszmin to make the texter proud.

Closer to 8 a.m., texts were exchanged between the Forde and Gaxiola phones about “Red” not being able to leave his location and their need to “lay low.”

Prosecutors believe the gauze was to be used to attend to wounds received by Forde’s second-in-command, Jason Bush, who was shot during the home invasion.

The report from the Arizona Star continues:

Navarro also told jurors several letters written by Forde in the Pima County jail were seized. He read them aloud as prosecutor Kellie Johnson displayed them using a projector.

In them, Forde instructed her son, Devon Duffy, to tell jurors he either purchased various pieces of jewelry for her or recognized them from years ago. Prosecutors allege several items of jewelry found in Forde’s Honda Element after the slayings were stolen from the Flores house.

Navarro testified authorities also found a letter addressed to a Thomas Gibler. In that letter, Forde asked Gibler to testify he had given her an ornate belt buckle with the letter “G” on it because she loved the “Guess” brand name. She asked him to tell jurors he didn’t remember which Western store he’d purchased it from.

Forde started out that letter, “So the story is this:”

Gonzalez testified last week she bought the buckle when she was a teenager and the “G” was for her name.

The defense pointed out that while the texts may have come from Forde’s phone, there was not proof that Forde herself sent them.

A DNA expert also testified this week that DNA found on a ring owned by Gina Gonzalez, the mother of Brisenia Flores, was consistent with Shawna Forde’s DNA, although he added that there was a 1 in 2000 chance that it could belong to someone else. The expert explained that the sample was small and did not present a full profile of the individual’s DNA.