The scope of the tragedy still boggles the mind: Arizona Congresswoman Gabrielle Giffords shot point-blank as part of a rampage that left six people dead and more than a dozen wounded.

The motives of the 22-year-old shooter, almost certainly mentally ill, will likely never be entirely understood.

One thing is clear, though: The assassination attempt took place against a backdrop of toxic political discourse and hate speech that is lifting too many people to the brink.

Giffords, for example, was receiving a steady stream of threats, many rooted in her opposition to Arizona’s harsh immigration law and support for health care reform. In March, windows in Giffords’ office were either smashed out or shot with an air gun. 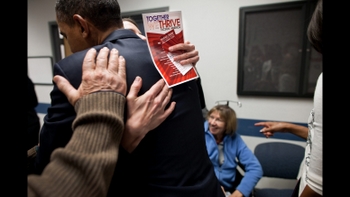 President Obama greets victims of the Arizona shooting and their family members.

After the attack, Clarence Dupnik, the Arizona sheriff whose police force handled the crime, expressed his concern about the effects of hateful rhetoric:

“When you look at unbalanced people, how they respond to the vitriol that comes out of certain mouths about tearing down the government…The anger, the hatred, the bigotry that goes on in this country is getting to be outrageous,” he said.

It’s a story we on Long Island know too well. The beating death of Ecuadorian immigrant Marcelo Lucero by teenagers gone “beaner hopping” took place in a similar climate of increasing hatred. That killing followed a decade of political rhetoric against immigrants, creating an environment where dehumanizing our fellow Long Islanders became a norm instead of an exception.

Of course, individuals are responsible for their own actions and should be held accountable as such. But what can we do to prevent these types of atrocities?

The first step should be a change in our national discourse. Speaking at the memorial service for victims of the Arizona shooting, President Obama eloquently addressed the issue, calling for a new era of civility, regardless of viewpoint or political persuasion:

“At a time when our discourse has become so sharply polarized, at a time when we are far too eager to lay the blame for all that ails the world at the feet of those who think differently than we do,” he said, “it’s important for us to pause for a moment and make sure that we are talking with each other in a way that heals, not a way that wounds.” 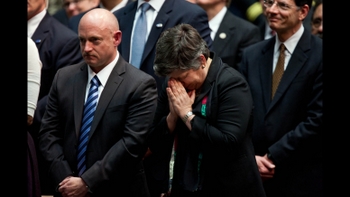 In Arizona and Long Island alike, our sense of our common humanity must guide us. When we think and speak of those who are not like us, or those with whom we disagree, let’s consider the words of the president:

“I believe that for all our imperfections,” he said, “we are full of decency and goodness, and that the forces that divide us are not as strong as those that unite us.”

If a tragedy like this can bring any good, it’s that we can now reevaluate how we communicate with one another. Let’s give respect and dignity a chance.

Images courtesy of the White House.