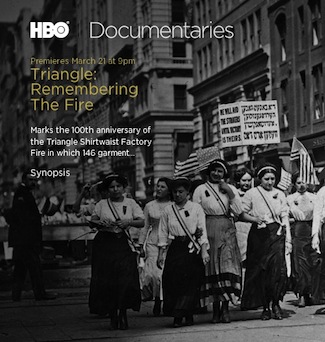 The film recounts the story of the young Jewish and Italian immigrant women who fought for their right to bargain collectively, lost, and eventually died in New York’s worst industrial accident, the Triangle Shirtwaist Factory fire. After those deaths, the state implemented one of the toughest workplace safety codes in the country and the International Ladies Garment Workers Union went on to organize the needle trades.

The film, which airs days before the 100th anniversary of the fire on March 25, brings closure to the story of six previously unidentified workers by finally identifying everyone who died that evening.

At a time when the right to organize is again under attack, let’s remember the sacrifice these and so many other immigrants made to secure basic protections for all workers.