This is the fourth installment of The immigrants’ Civil War.

When Lincoln ran for election to the presidency in 1860, he had a highly developed bilingual campaign strategy. He knew that German immigrants had voted Democratic in the last presidential race and he needed to change that. The Republican Party included the remnants of the anti-immigrant Know Nothing party and Germans were repelled by the bigotry and “Puritanism” of that wing of the Republicans. If Germans went heavily for the Democrats, there was a chance Lincoln could lose in the Midwest and New York.

Lincoln knew that many of the Germans were fed up with the failure of the Democrats to keep slavery out of the newly opened territories in the West.

German liberals were appalled by slavery. They saw it as a violation of the liberty promised by the Declaration of Independence. Even less politically liberal Germans were against slavery’s spread. They viewed the western United States as a refuge for Europe’s displaced, and they worried that introduction of slavery into the territories would destroy labor conditions for new immigrants.

Key to Lincoln’s strategy to win the German vote was to speak to the immigrants in their own language using the cultural heritage they brought with them to convince German-Americans that Lincoln understood and respected them. So, Lincoln bought a German newspaper and made sure that his campaign materials were published in German. He also convinced the still-young radical hero Carl Schurz to leave his young wife and hit the campaign trail as his apostle to German liberals. 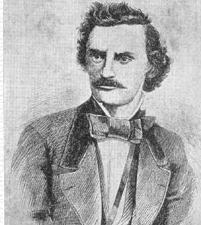 Carl Schurz as a young man

Schurz spread the Lincoln gospel against the expansion of slavery in the West in 1860 throughout Wisconsin, Illinois, Indiana, Ohio, Pennsylvania, and New York, wherever German immigrants lived or worked. He recalled later that he might one day speak in a city’s largest hall and the next day in a barn in front a group of immigrant farmers.1

Schurz was away from home for months, but he wrote frequent intimate letters to his wife Margarethe Meyer-Schurz, whom he affectionately called “Gredel.” Gredel was an accomplished woman who had already founded the first kindergarten in the United States.

Schurz shared his deepest thoughts with his wife in his letters. On Nov. 7, 1860 he wrote of his joy over Lincoln’s victory in the presidential election:

The election is over, the battle is fought, the victory is won. …When the first boom of the cannon announced that the great work was finished, the great victory won, nothing was lacking save that in this auspicious moment I should have had you with me. Now the time of trial is over. Love, peace, family, happiness! The future threatens no further separations.2

The next four years would see Schurz’s hope of domestic and political peace shattered. In fact, as a stalwart opponent of slavery, Schurz would contribute to the polarized politics that preceded the Confederate attack on Fort Sumter. Schurz rejected efforts to compromise with the slave owners of the South and he advised Lincoln to reject any deal to avert war that allowed the spread of slavery. He wrote to his wife after Christmas that Lincoln was holding firm against appeasing the Confederates. “Old Abe so far is splendid” he wrote her, “and it would not surprise me if his administration were to determine the future development of the Republic.”3

When Schurz learned in January, 1861, that Lincoln had rejected Northern pleas for compromise on slavery, he wrote to Gredel that “our victory is assured and the great struggle between slavery and freedom is finally decided. Glory to him! Long live Lincoln. We live in a wonderful time… It is…the age of conscience-ruled men who dominate affairs by the force of honesty and shatter all opposing obstacles.”4

The movement of the South towards war sobered Schurz, who realized that he would be called upon by Lincoln to serve his county as a diplomat and a military commander. By the end of January 1861, Schurz finally realized that with war impending, any hopes he and Gredel may have had of romantic family life would have to be delayed. He wrote an apologetic letter to Gredel at the end of that month, telling her that he understood that they had both sacrificed financial security and one another’s company for their ideals. Schurz told his beloved partner, “I know that your soul, like my own, responds to the call of high duty and that the heroism of your nature will lift you above all lower duties…”5

Over the next month, before Lincoln’s March inauguration, Schurz heard rumors that Republican bigwigs were trying to get Lincoln to back down on the slavery question. Schurz wrote to the president-elect urging him to be a steadfast friend of liberty. Schurz’s concern was so great that he interrupted a speaking tour to see Lincoln in Springfield just before Lincoln left for Washington.

Sensing his visitor’s concern, Lincoln read his First Inaugural Address to Schurz. When he finished, Lincoln looked at Schurz and said, “Now you know better than any man in this country how I stand, and you shall be sure that I shall never betray my principles and my friends.”6

The immigrant’s powerful friend had stood firm, and the war came in a matter of weeks. Schurz’s promise five months earlier to Gredel of a tranquil family life would prove illusory as their lives, and those of millions of others, were transformed forever by the Confederate attack on Fort Sumter.