This is the fifth installment in a series of articles about attacks on birthright citizenship in Arizona. For the rest of the series, click here.

On the surface, several Arizona bills aimed at redefining birthright citizenship appear to have one target: the US-born children of undocumented immigrants. But these bills, and a half-a-dozen other pieces of legislation introduced across the country, have a second and just as important target.

What gives me that impression? Look at the odd choice of language in SB 1308, an Arizona bill that would create two classes of birth certificates, one for the children of US citizens and legal permanent residents, and one for everybody else:

What is odd about the language, is that the term “natural-born United States citizen” is not an immigration term at all. The Immigration and Nationality Act, which defines federal immigration law, talks about who is a “citizen” and who is not, but it does not use the term “natural born citizen” at all. If the proponents of SB 1308 were only focused on the children of the undocumented, presumably they would have used the common nationality terminology that has been employed over and over in our laws for more than 200 years.

Instead they use a term, “natural-born United States citizen,” that has no immigration law significance, but which is a requirement for someone to serve as president of the United States.

This language, which the average reader might easily miss, was designed to propel the birther movement forward.

The principal sponsors of the Arizona birth certificate bill, Senate President Russell Pearce and Senator Gould are both proponents of the birther conspiracy theory. Bills similar to the Arizona legislation have been introduced by Pearce’s allies in other states. 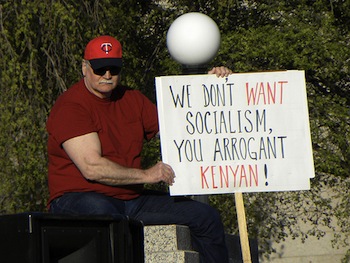 In Oklahoma, legislator Ralph Shortey has spearheaded the effort to issue “natural born citizen” birth certificates. According to Politico, Shortey is also leading the movement in the state to examine President Obama’s birth records:

Ralph Shortey is one of three Republican state senators who have introduced bills seeking proof of birth from presidential candidates, and … said he doesn’t know if the president was born in the country.

“I don’t know one way or the other because I’ve not seen evidence one way or the other,” Shortey said, contending that the bill isn’t necessarily about Obama. “To be honest, I don’t care [if the president is a citizen]. He’s our president, and we elected him, whether he’s qualified or not.”

Politico says that this linkage between the “natural born citizen” language and the presidency is not restricted to the Southwest:

Missouri GOP state Rep. Lyle Rowland framed his own bill as a check against illegal immigration.

“We have problems with illegal immigrants. And if something were to happen where one of them became popular with the people, we need documents proving if they are a citizen,” said Rowland.

Just so you don’t think that birtherism is a fringe conspiracy theory dead after the embarrassing circus performances by its leading expositors a year and a half ago, you need only look at some recent polling data published in Politico on February 14:

In a shocking finding, more than half of GOP primary voters believe President Barack Obama was not born in the United States, according to a new poll.

Fifty-one percent of 400 Republican primary voters surveyed nationwide by Public Policy Polling said they ascribe to the controversial birther conspiracy theory — despite the fact that the state of Hawaii has posted Obama’s certificate of live birth.

“Any thought that the birther theory has been put to rest can be thrown out the window,” said Dean Debnam, the president of the Democratic-leaning polling firm. “That view is still widely held in Republican circles.”