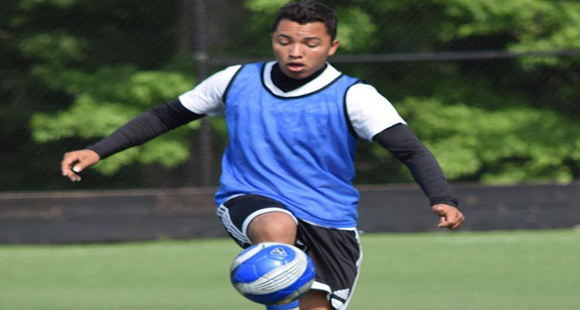 The walls that keep 19 year old Wildin Guillen confined in a Georgia detention center do not stop him from keeping his dreams alive. While he is detained, he gets homework that his teachers at Riverside High School, in North Carolina, send him via email.

This is the only way that Wildin, a Central American refugee from Honduras, can continue pursuing his goal to graduate this June.

He fled Honduras to escape extreme violence at age 16. Coming to the United States gave him the opportunity to study without fear. But the light that was shining his path was drastically turned off in January when ICE arrested him. Wildin was given an order of removal in absentia. He is currently being held at the Steward Detention Center in Lumpkin, Georgia, awaiting deportation.

“He is a very special and exemplary son, with good feelings, and excellent values and desires,” said Dilsia Acosta, Wildin’s mother. “I ask ICE to release him, he can’t go back to Honduras. For my son to be deported means that he would be deported to his death.”

Dilsia was heartbroken the day she saw how her son was cruelly arrested. Wildin was detained on January 28th at 6:30 a.m. when he was leaving his home for school. ICE agents were waiting in the parking lot in front of his home. When he was going to his car, two ICE’s officers approached him and took him into a van. Dilsia said that she saw her son on the ground and that the agents took him by the neck and his shirt, and pulled him up. 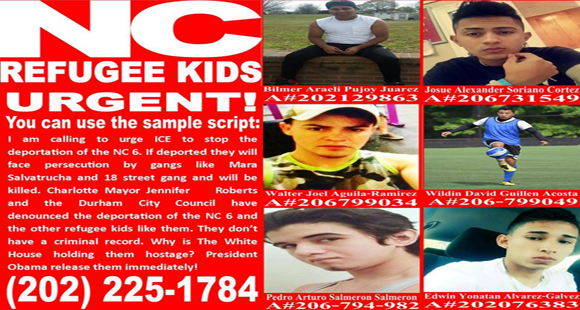 Wildin is part of a group of six young refugees that were detained by immigration authorities in Georgia at the end of January. The victims are Wildin; Edwin Alvarez-Galvez, 18; Bilmer Pujoy-Juarez, 18; Josue Soriano-Cortez, 19; Pedro Salmeron-Salmeron, 19; and Walter Aguilar-Ramirez, 19. They all came from Central America crossing the U.S.-Mexico border and were high school students in Georgia. At least one of them reported to have been targeted by gangs back in his homeland.

“Like the other students who have been detained, my son has goals and dreams for the future. They’re not criminals, they’re not gang members, they’re kids who are fleeing for their lives. We hope that President Obama will open his heart and the students will be released,” said Dilsia.

This week Alerta Migratoria, an organization based in Durham, North Carolina, which helps immigrants seeking asylum in the U.S. sent a letter to Secretary of State Jeh Johnson, condemning these “terrorizing raids,” and asked him to grant prosecutorial discretion and the immediate release of the students.

Social and legal services for refugee children after their release from custody are key to ensure their protection while they await the outcome of their removal proceedings. Having access to attorneys is also an important component of post-related services to make sure they have a fair chance to due process in immigration court. Unfortunately, the U.S. government has failed to deal with this situation with a humanitarian response. Just recently some government officials are beginning to recognize the migration of thousands of Central American refugees as a humanitarian crisis.

“Rather than implementing policies that ensure the rights and safety of asylum seekers, the Administration’s response has been focused on deterring people from coming in the first place,” said Jennifer Podkul, from the Women’s Refugee Commission. “Despite claims from the contrary, these families seeking protection in the United States have never had a fair chance to make their case to immigration court, making their deportation to potential harm and violence even more outrageous.”

Teacher asks for release of student detained by ICE on way to school:

Conditions in the Northern Triangle Region of Central America (El Salvador, Guatemala, Honduras) have deteriorated, leading to an increased number of Central American refugee children reaching our Southern border in recent years. But this is not a “border crisis.” These are young, vulnerable people pursuing their right to asylum under domestic and international law.

El Salvador, Guatemala and Honduras are facing high levels of violence and insecurity. The homicides rate for these three countries are currently in the top five globally. Also, the U.S. State Department reports that the conviction rates for crimes in these countries are between 1% or 2%.

The victim’s family members are currently pursuing legal counsel to reopen their children’s removal orders. “As this legal process moves forward, ICE detention, far away from family, community and counsel, is no place for teenagers who have likely suffered significant trauma,” the organizations signing the letter stated.