When German immigrant leader Franz Sigel was passed over for promotion in early 1862, he managed to win a victory by taking the ultimate step; resigning from the army. The sharp reaction of America’s German community forced Lincoln to promote him to major general and make him second in command of the Union army in Southwest Missouri. Sigel’s win came at a cost. His promotion had been won over the opposition of his superior, General Henry Halleck, who commanded the department. 1

Halleck could, despite his own German ancestry, be caustic and openly bigoted in his assessment of the German immigrants who fought and died for the Union. He described immigrant soldiers serving under him in a letter to Gen. George B. McClellan in January of 1862 as a “very dangerous element in society as well as in the army.” While conceding that some Germans were “excellent men”, he complained that others were “little more than armed barbarians.”2

Halleck was wary of the Germans as a potentially radical element. He apparently believed that a secret German conspiracy with native-born abolitionists was promoting Sigel’s interests. They had, he wrote, formulated a “plan…to force the President to make Sigel a major-general… [Sigel] would claim all the German regiments…and by continually fomenting dissatisfaction among the German troops and German population, they could completely paralyze and control the actions of the Government.”3 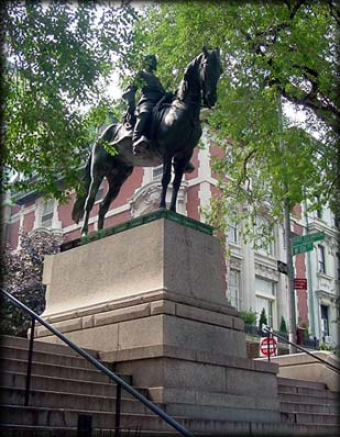 Sigel’s heroic image was so great that half-a-century after the Civil War, this statue of him was erected in Manhattan at 106th St. and Riverside Dr.

Halleck’s self-interested paranoia is clear in the following passage from a February 1862 letter he wrote to McClellan:

The German and Abolition press throughout the country would use Sigel as an instrument with which to attack me and break down…my authority.

Halleck believed that the German conspirators would soon demand that he himself be replaced by Sigel. The worried general wrote to McClellan that he thought that Confederate sympathizers were indirectly assisting the German and Abolitionist conspirators!4

Sigel’s success simply reinforced Halleck’s suspicious mind. During the first quarter of 1862, Sigel elevated his national profile and advanced in the military. Lincoln himself had come to Sigel’s defense, writing to Halleck that the “Germans are true and patriotic.”  Unfortunately for Sigel, Halleck would soon be promoted to the command of all United States forces. Sigel’s triumph had earned him a powerful enemy.5