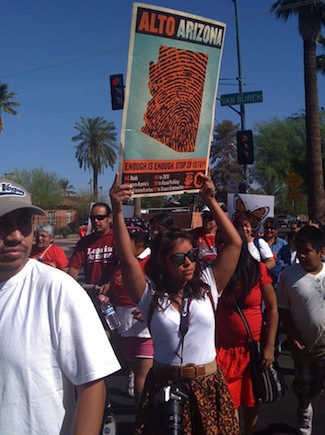 A federal judge yesterday blocked a provision in Arizona’s immigration law SB 1070 that attempted to prohibit laborers from seeking work on the street. The decision represents a victory for Latino, immigrant, and civil rights groups fighting against the discriminatory law.

U.S. District Judge Susan Bolton ruled Wednesday that groups seeking to overturn the law will likely prevail in their claim that the day labor rules violate the First Amendment. She rejected arguments by the state that the rules were needed for traffic safety and pointed out that the law, also known as SB1070, says its purpose is to make attrition through enforcement the immigration policy of state and local government agencies.

“This purposes clause applies to all sections of SB1070, and nowhere does it state that a purpose of the statutes and statutory revisions is to enhance traffic safety,” the judge wrote.

The ban was among a handful of provisions in the law that were allowed to take effect after a July 2010 decision by Bolton halted enforcement of other, more controversial elements of the law. The previously blocked portions include a requirement that police, while enforcing other laws, question people’s immigration status if officers suspect they are in the country illegally.

Here on Long Island, the Town of Oyster Bay passed a similar ordinance in 2009, threatening to fine people who stood on the side of the road and waved their hand as if to solicit work. In response to the ordinance, civil rights groups filed a lawsuit on the grounds that the ordinance prohibits free speech, and a temporary injunction has been filed to halt it.

Oyster Bay Town Supervisor John Venditto supports the measure, and has even stated that it was solely designed to target Latino day laborers, and not other residents who might solicit near roadways.