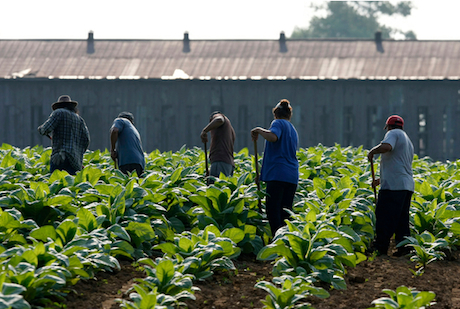 Hundreds of thousands of immigrant farmworker women across the country are vulnerable to sexual violence and abuse because they lack adequate workplace protections, according to a recent report by Human Rights Watch.

A reauthorization of the Violence Against Women Act (VAWA) would give some aid to these women, according to the organization, but more is needed. As it stands, Republicans in Congress are backing a version of the bill that would scale back important protections for immigrant women.

Human Rights Watch on the report:

The 95-page report, “Cultivating Fear: The Vulnerability of Immigrant Farmworkers in the US to Sexual Violence and Sexual Harassment,” describes rape, stalking, unwanted touching, exhibitionism, or vulgar and obscene language by supervisors, employers, and others in positions of power. Most farmworkers interviewed said they had experienced such treatment or knew others who had. And most said they had not reported these or other workplace abuses, fearing reprisals. Those who had filed sexual harassment claims or reported sexual assault to the police had done so with the encouragement and assistance of survivor advocates or attorneys in the face of difficult challenges.

“Rape, groping, and obscene language by abusive supervisors should not be part of the hard labor conditions that immigrant farmworkers endure while producing the nation’s food,” said Grace Meng, researcher in the US Program at Human Rights Watch and author of the report. “Instead of being valued for their contributions, immigrant farmworkers are subject to a dysfunctional immigration system and labor laws that exclude them from basic protections most workers take for granted.”