Approximately 250,000 Oaxacans migrate to northern Mexico or the United States each year, and close to 1.5 million live in the United States—a significant percentage for a state whose population is 3.8 million. Also, despite evidence of decreased cross-border migration, the economic pressure pushing Oaxacans to leave remains excruciatingly high: 17 years after the passage of the North American Free Trade Agreement (NAFTA), 76 percent of the Oaxacan population lives in poverty.

These statistics and more were brought to life on a delegation I participated in from Long Island to Oaxaca with the organization Witness for Peace from October 4-12. We not only saw the massive push to migrate north, but also the myriad forms of resistance to this economic imposition from above: from people anchoring themselves to the rich and vibrant traditions in Oaxaca’s isthmus region; from communities, civil society organizations, and even the state government actively looking for economic alternatives to migration; and from an entire parish in Matias Romero, which declared itself in solidarity with the mainly Central American migrants who pass through the small city heading north on the train. 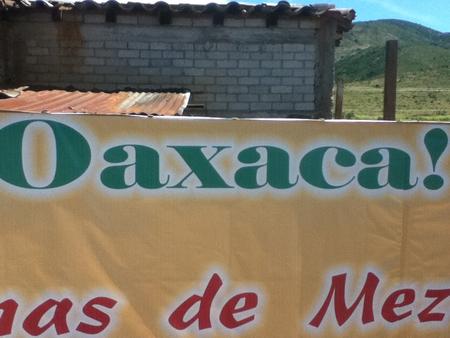 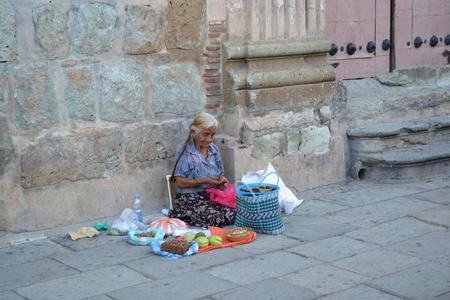 It all began in Oaxaca City. 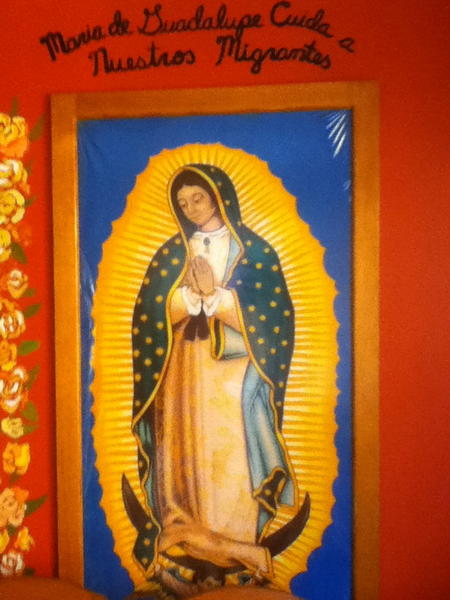 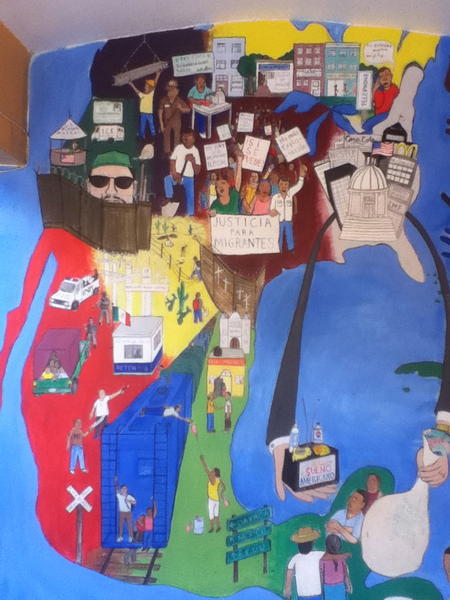 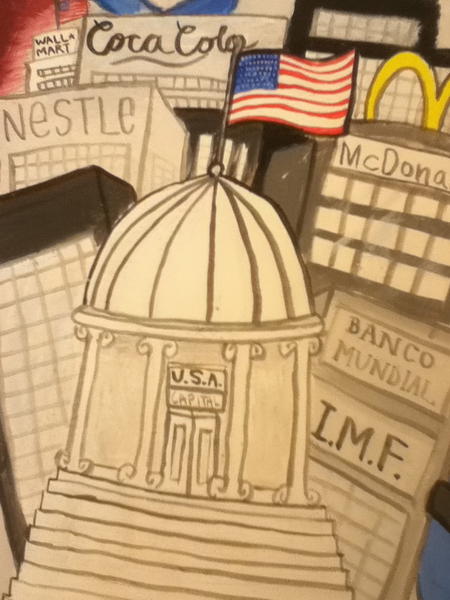 A mural in the same migrant shelter depicts the NAFTAization and CAFTAization of the Mexican and Central American economies. Its ensuing pressure and allure, the mural suggests, has undermined local economies and forced people to migrate north. 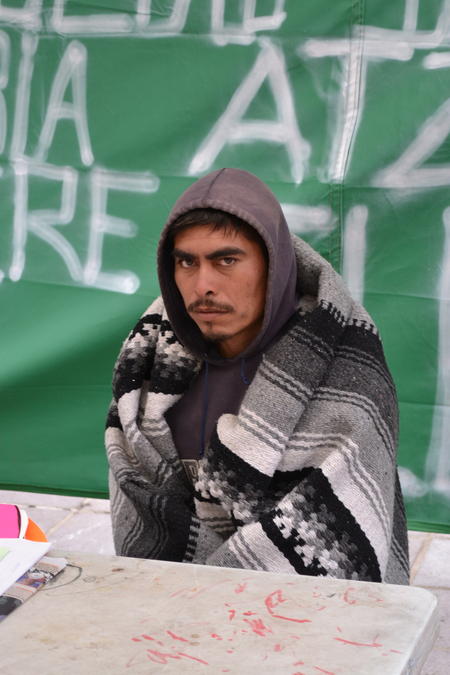 A man from Santa Maria Azompa in a hunger strike in Oaxaca City’s Zocalo. 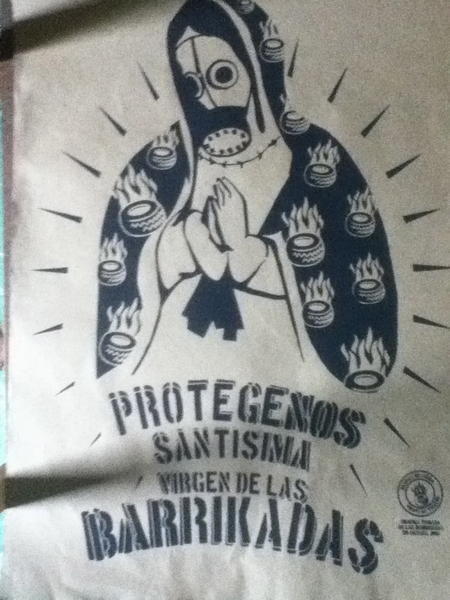 “Protect us Santisima Virgin of the Barricades.” The burning tires and gas mask represent the the tension of the massive social conflict in Oaxaca during 2006. Despite a new governor from a new political party taking power in December 2010, many similar political and economic tensions still exist in Oaxaca.

In La Ventanosa, in the Istmus of Oaxaca, we saw the windmills constructed by the Spanish company Iberdrola on our way to Matias Romero. This project has impacted several communities in the area, many who have resisted its construction. When we asked people in nearby Matias Romero if they had seen any local improvement in the electricity service or lower prices, the answer was no. They thought that electricity generated was sold on the global market, and possibly to the United States. This is one of many corporate-led megaprojects in the resource-rich Istmus region. 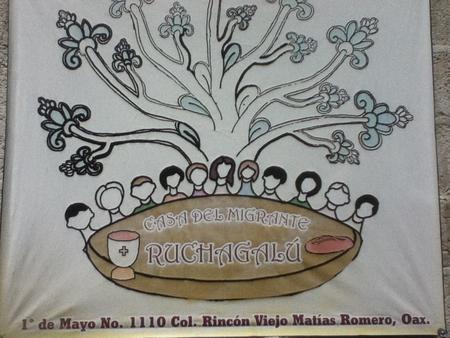 In Matias Romero, I stayed at the Ruchagalu Migrant Center. Ruchagalu means to welcome with open arms and hearts in the Zapoteco language (a common language in this area of Oaxaca).

A procession as part of the “14th Cultural Festival” in Matias Romero in resistance to the legacy of Columbus (the festival always takes place around Columbus Day in early October). Modesta, the woman in charge of the Rugachalu Migrant Center, put it another way—she called it a festival of people asserting their traditions in the face of economic imposition, or, in other words, the people of Matias Romero asserting their right not to have to migrate. 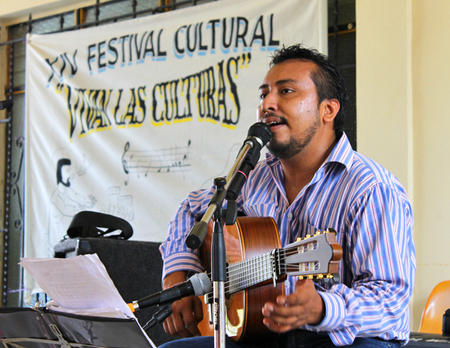 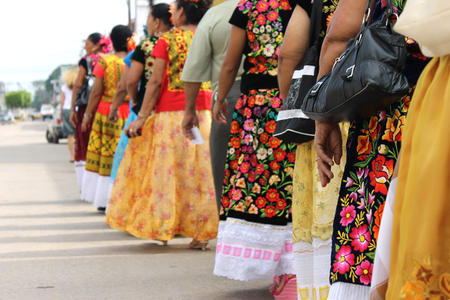 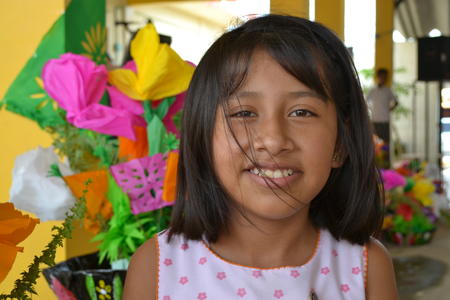 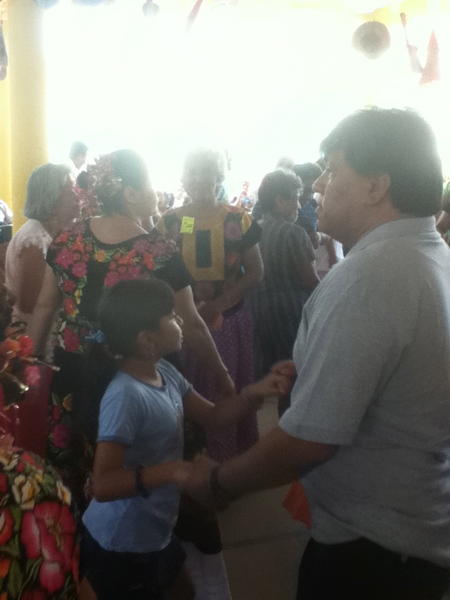 Dancing at the festival. 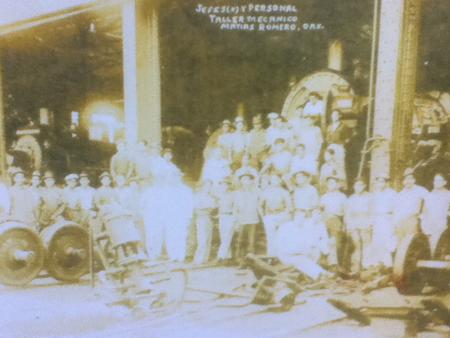 Matias Romero was a railroad town, but in the mid 1990s the Mexican government, under the logic of NAFTA, sold off the national railroad to private industry. Passenger train service discontinued soon thereafter, killing 7,000 jobs in Matias Romero. (Special thanks to the Casa CulturArte for allowing me to take a photo of their photo.) 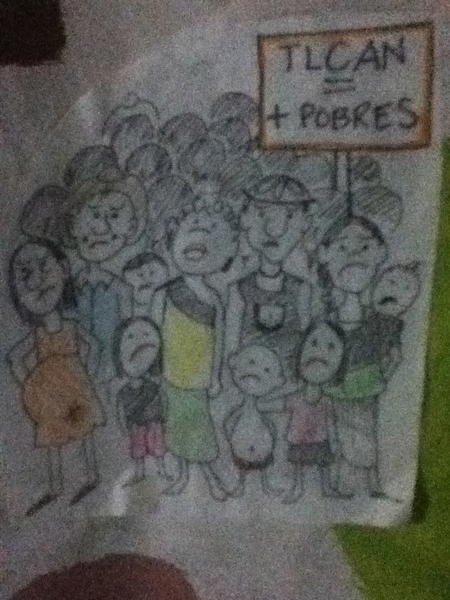 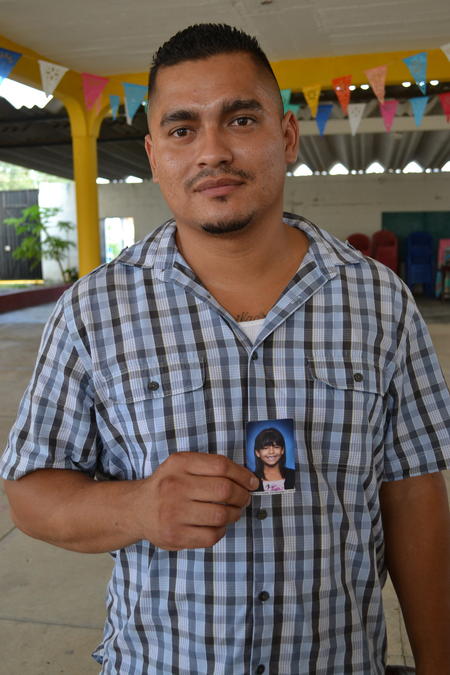 When he was nine years old, Alex and his family migrated from Matias Romero to the United States. 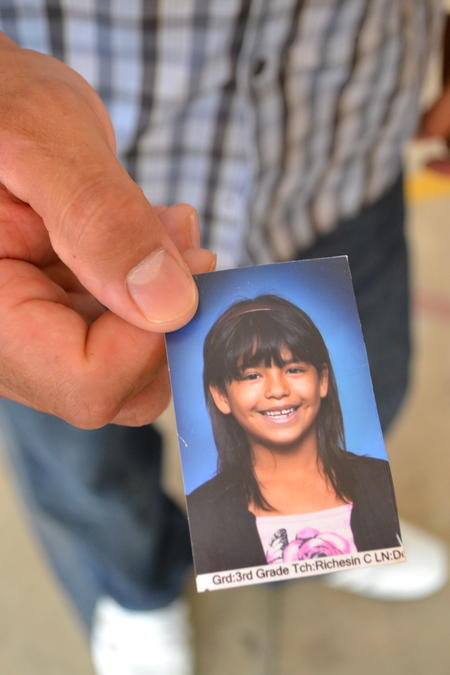 However, Immigration and Customs Enforcement deported Alex in August from the United States, one of the more than a million deportations under the Obama administration. Alex holds a picture of his daughter, who remains in California. 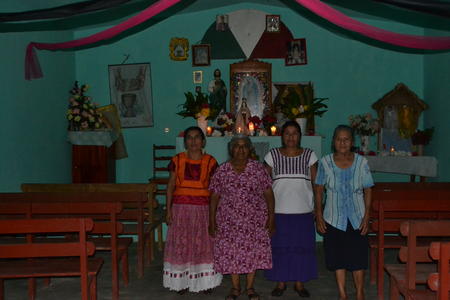 These women from the Zapoteco community Seppune near Matias Romero have or have had sons, daughters, and husbands in the United States. All have stories about how emotionally difficult it is to be separated from their loved ones for so long. 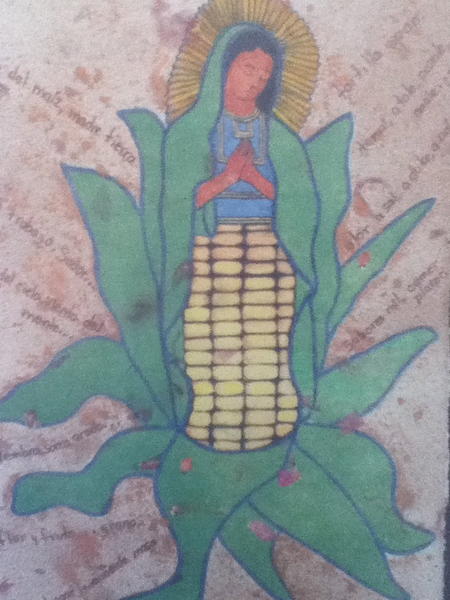 The Virgin Guadalupe of corn—surely an important presence in Oaxaca, one of the first places in the world where people domesticated corn. Now many Oaxacan small corn farmers are migrating north, like those from Seppune. 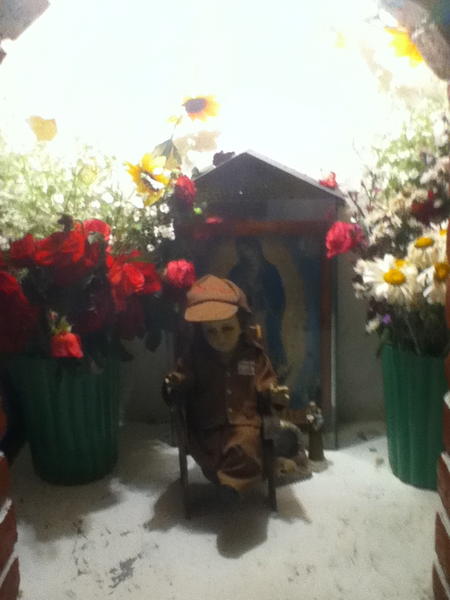 Not quite as revered, but often respected, is the PEMEX attendant (above in the altar). The attendant is part of Mexico’s nationalized oil company, increasingly under threat as global oil companies want to open it up to private investment, much like the railroad in Matias Romero. 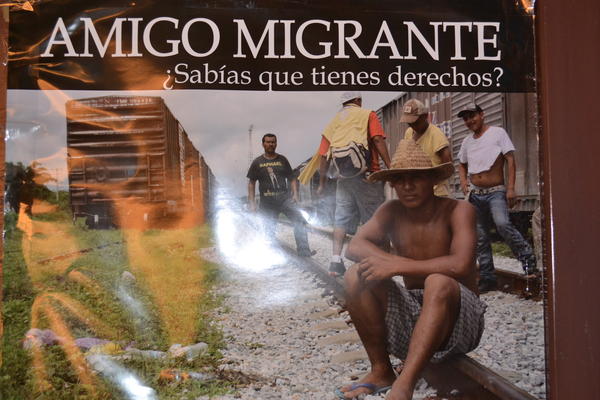 Now the train that passes through Matias Romero is one of the primary modes of transportation for Central American migrants heading north, as this know-your-rights poster suggests.

The delegation from New York  with some of the people who work at the Migrant Center Rugachalu and the Witness for Peace International Team. The intention of the group is to bring this experience back to their local areas in Long Island, to make it a much more welcoming place for migrants.

For more from the Border Wars blog, visit nacla.org/blog/border-wars. And now you can follow it on twitter @NACLABorderWars. See also the May/June 2011 NACLA Report, Mexico’s Drug Crisis; the Jan/Feb 2009NACLA Report, Taking on Policy in the Obama Era; and the May/June 2007 NACLA Report, Of Migrants & Minutemen. Subscribe to NACLA.