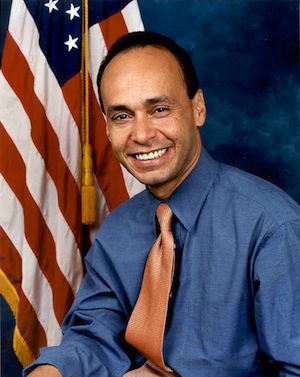 Illinois Congressman Luis Gutierrez has issued a press release on the announcement by the Obama administration that it will halt deportations of non-criminal undocumented immigrants and allow them the opportunity to work.

Over the past several years, Gutierrez has been a particularly an outspoken advocate for immigrant rights:

“I am proud of the President and Secretary Napolitano for standing up for a more rational approach to enforcing our current immigration laws,” Congressman says

(Washington) – Today, Congressman Luis V. Gutierrez (D-IL) issued a statement reacting to an announcement that the Department of Homeland Security (DHS) would review deportation cases based on newly-issued guidelines establishing which cases are priories for deportation and which are not.  The review of pending deportation cases and the instructions to all elements of DHS over how immigrants that meet certain criteria should be handled has come after months of sustained advocacy by Congressman Gutierrez, the Congressional Hispanic Caucus, other Democratic leaders in the House and Senate, and determined public pressure by from clergy, advocates, immigrants, and DREAM Act students nationwide.  The announcement by DHS will apparently make one of Congressman Gutierrez’ key demands a reality: putting a halt to the deportation of young people who were brought to the U.S. as children and who are crime free and pursuing their education; in other words, those who would qualify for the DREAM Act, which was passed by the House of Representatives in 2010 but died in the Senate when only 55 out of 100 Senators voted to move the bill forward.

The Congressman was briefed on today’s DHS announcement by the Director of Immigration and Customs Enforcement (ICE) John Morton by telephone yesterday evening. The following is a statement by Rep. Luis V. Gutierrez:

I have been vocal in my criticism of the President and his Administration over the dramatic increase in deportations on his watch and have traveled the country urging him to use his power under existing law to do what he can to help.  This is the Barack Obama I have been waiting for and that Latino and immigrant voters helped put in office to fight for sensible immigration policies.  Focusing scarce resources on deporting serious criminals, gang bangers, and drug dealers and setting aside non-criminals with deep roots in the U.S. until Congress fixes our laws is the right thing to do and I am proud of the President and Secretary Napolitano for standing up for a more rational approach to enforcing our current immigration laws.

Today is a victory not just for immigrants but for the American people as a whole because it makes no sense to deport DREAM Act students and others who can make great contributions to America and pose no threat.  It is not in our national interest to send away young people who were raised in the U.S. and have been educated here and want only to contribute to this country’s success.

I have asked ICE Director John Morton to come to Capitol Hill and brief Members of Congress on how this will affect their constituents as soon as Congress reconvenes.  My Chicago office and Congressional offices across the country have been inundated with cases of DREAM Act students, military families, and U.S. citizens whose families are being threatened with deportation or who have actually been deported.  Putting the new priorities into practice so that cases can be reviewed and getting the word out to caseworkers in Congressional offices, in the legal community, and to individual immigrants facing deportation is critical and time-sensitive and we will work with ICE and DHS on that immediately.

This action does not address all of my concerns, but it is the start of a process that will save many American families and individuals who deserve to live long and productive lives in this country. There are still U.S. citizens and legal permanent residents in families with undocumented immigrants who can obtain legal status under existing law, but who do not do so because of an unfair three- and ten-year penalty barring them from the U.S. if they apply.  The rapidly expanding “Secure Communities” state and local enforcement program that undermines public safety and has caught tens of thousands of non-criminals in its dragnet remains a big problem.  But today’s announcement shows that this President is willing to put muscle behind his words and to use his power to intervene when the lives of good people are being ruined by bad laws.