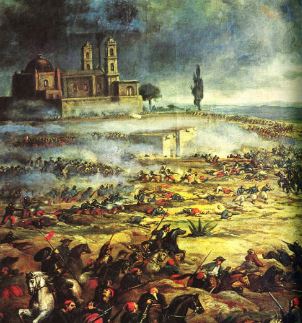 Scroll to the bottom for The Immigrants’ Civil War index.

Saturday’s 150th anniversary of Cinco de Mayo came in the middle of the 150th commemoration of the American Civil War. New research shows that the two anniversaries are directly connected.

Diana Gordon wrote a feature piece for Long Island Wins on the history of the battle against France in 1862 that gave rise to the Cinco de Mayo holiday. One phenomena that she pointed out was that while May 5 is celebrated throughout the United States, it is more of a local celebration in Mexico. The greatest festivities take place in Puebla where the battle against the invading French took place in 1862.

David Hayes-Bautista, who is a medical professor at UCLA, has published a new study arguing that the holiday’s popularity here is not an accident. It was first popularized by Latinos in the United States during the Civil War as an expression of support for the Union side in the war.

“Cinco de Mayo is a tradition dating from the Civil War,” Hayes-Bautista told The Huffington Post. “It was all created in this country, by Latinos who supported freedom and racial equality and who were opposed to slavery, supremacy and the exclusion by government.”

The May 5, 1862, Battle of Puebla took place just as the United States was entering the second bloody year of the Civil War. Hayes-Bautista on the origins of Cinco de Mayo:

“The news of the Mexican victory over the French Army in Puebla were celebrated, not only immediately after it happened, but every year during the Civil War. That is the origin of why we celebrate the Cinco de Mayo,” said Hayes-Bautista, author of the new book “The Cinco de Mayo: An American Tradition,” whose publication coincides with the 150th anniversary of the Battle of Puebla.

For the professor, the equation is simple: “Latinos here supported [President Abraham] Lincoln. They supported freedom, and democracy. The French invaded Mexico to remove democracy, and to impose over Mexico a treaty with the Confederation,” he explained.

The first record of the celebration came only three days after the military victory, in an article from a newspaper in Columbia, a town in northern California, reporting how Mexicans living in that region threw a big, long party as news came of the defeat of French troops in Puebla. The celebrations continued through the years into what now is considered a Mexican festivity.

As part of the celebrations for the 150th anniversary of the Battle of Puebla, the Plaza of Culture and Arts in Los Angeles will showcase“Cinco de Mayo: Latinos in California Respond to the Civil War,”which explores the roots of this celebration in the Civil War. The show includes many of Hayes-Bautista’s findings, like photos, notes, journals, minutes and letters testifying to his discovery.