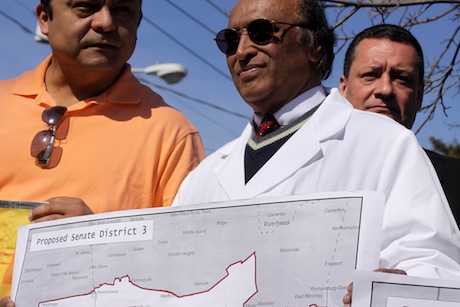 On Monday, Long Island’s Latino, immigrant, and African-American leaders joined their counterparts across the state to issue a clarion call to Governor Andrew Cuomo to veto the political maps proposed by the state’s redistricting taskforce (LATFOR). Speakers at the press conference, held in Brentwood on the site where LATFOR’s maps would divide the community in half, denounced the proposal for effectively disenfranchising communities of color by dividing several majority-minority communities and diluting their voting power.

Last month, LATFOR presented its maps for consideration by the State Assembly and State Senate. Now state legislators are trying to cut a deal with the governor that disregards the concerns of communities of color raised at the February 9 public hearing. The proposed State Senate map draws lines through the heart of Long Island’s communities of color in Islip, Babylon, and Hempstead—making it harder for these communities to be represented by politicians responsive to their needs. The LATFOR proposals clearly violate the standards of fair redistricting, and the governor should thus withstand the pressures for a back-room deal and exercise his veto power.

Kevin Nelson, a member of New York Communities for Change and Central Islip resident, stated: “There has been a loud outcry at various public hearings. The mandate of the people is clear. We urge Governor Cuomo, as our elected official, to veto these maps.”

Maria Magdalena Flores, a member of Make the Road New York and Brentwood resident, added, “They’re trying to cut our wings. To separate North Bay Shore, Central Islip, and Brenwood is to reduce our power. They seem scared that the growing Hispanic and African-American communities will influence the upcoming elections; we’ve grown, and when we organize we’re going to have more power.”

Susan Lerner, executive director of Common Cause New York, also issued the following statement: “Minority voters have been shown the back of the hand by Albany’s power structure. The continued division of Babylon/Islip and Hempstead stands in stark contrast to any notion of representational democracy. Common Cause/NY stands with the community groups today in condemning this blatant power grab and calling on Governor Cuomo to make good on his promise and veto these lines.”

The press conference, organized by the Long Island Civic Engagement Table, was held simultaneously with similar events across the state that will demonstrate the breadth of the movement for redistricting reform in New York.  The event featured speakers from various organizations, including Make the Road New York, New York Communities for Change, the Long Island Immigrant Alliance, the Central American Refugee Center (CARECEN), NAACP, Local 1102, Long Island Wins, and SEPA Mujer (Services for the Advancement of Women).

The Long Island Civic Engagement Table (LICET) seeks to transform the culture of civic participation and government accountability on Long Island. LICET does this by nurturing grassroots participation and leadership in low- and moderate-income communities of color. LICET, led by Make the Road New York, New York Communities for …