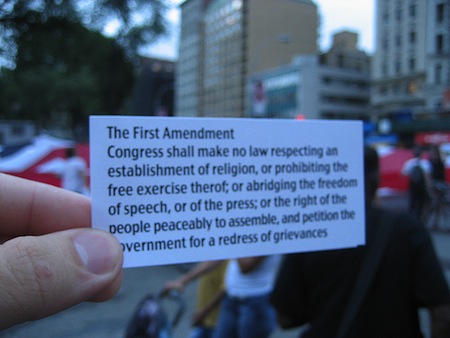 Last week in my civics class for citizenship applicants, I reviewed the First Amendment. I asked my students what “freedom of religion” means. One of my students said it meant, “We are to free to practice any religion, or no religion at all.”

Most of our religions are themselves immigrants. My great grandparents brought their Catholicism with them from Ireland. My friend Dave’s parents brought their Judaism here from Germany and Austria. Both sets of immigrants left their homelands because they were discriminated against and persecuted for their religions. Both came to America because of the freedom promised by the Bill of Rights.

We also have native-born religions in America. Mormonism was born in upstate New York. Over the years, I’ve had the privilege to have two interns from Brigham Young University, both of whom were Mormons. They both made significant contributions to the well-being of Long Island’s immigrant community.

I haven’t spoken to either of them since the bigoted remarks of a speaker at the Values Voters Summit were made last week, but I can only imagine how they feel.

Perhaps politically active ministers should take a moment off from reading the Bible and read the First Amendment for the 40 seconds it would take. My immigrant students have.