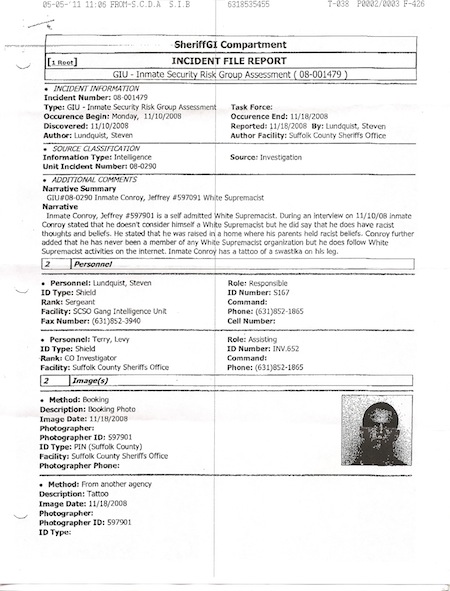 During a recent performance of the play “What Killed Marcelo Lucero?” in Patchogue, the father of Lucero’s killer spoke during an audience discussion, insisting that his son had been unfairly labeled a racist.

In April 2010, Jeffrey Conroy was convicted of first-degree manslaughter as a hate crime in relation to the Lucero killing, and he received the maximum sentence of 25 years in prison.

A little more than a year later, Jeffrey Conroy’s father, Bob Conroy, sought to rebrand his son’s public image. At the play, he insisted that Jeffrey wasn’t a racist and described his son as a victim of intense media coverage.

“I’m sorry for what’s happened, but I feel that the problems of a nation fell on a 17-year-old child,” Conroy told the audience.

He later added: “This kid got more press internationally than Jeffrey Dahmer did…He was 17 years old, he could have been anyone’s child.”

After Conroy spoke, another audience member promptly responded that Conroy was trying to rewrite history:

In the story that I wrote about the play, I mentioned that upon admission to jail after the killing, Jeffrey Conroy told jail personnel that his parents held racist views and that he visited white supremacist websites. The interview was summarized on an “Inmate Security Risk Assessment” form.

I learned about the jail intake form during the pretrial hearing for Conroy, in which the prosecution and defense sparred over whether the document should be considered admissible in the murder trial. Conroy’s defense lawyer argued that the defendant only admitted to white supremacist activities because he feared being housed with inmates who might attack him based on his then-alleged crimes.

The form was found to be admissible, but the prosecution never introduced it as evidence.

For anyone evaluating the relevance of this document, it is important to remember that it is a risk assessment form compiled by the Suffolk County Sheriff’s Office, and not an independent body.

Scroll down for a copy of the jail intake form, which I obtained through a Freedom of Information Law request. Here is the relevant information from the intake interview: