This article is part of the series The Immigrants’ Civil War. A complete list of articles in the series is at the bottom of the page.

The spread of revolts across the Arab world this year has been compared to the revolutionary uprisings that caught Europe’s monarchs by surprise in 1848.

That year seems so long ago today, but the momentous events of 1848 took place just a dozen years before Abraham Lincoln’s election to the presidency.

Most of America’s Civil War immigrants became Americans because of what happened on three continents and in more than a dozen countries that year.

In Europe, 1848 brought both hope and disaster. At the beginning of the year all of the great powers of the continent were monarchies, ranging from constitutional Britain to absolutist Russia and Prussia. In February, revolution erupted in Paris. Word of the uprising quickly spread through all of Europe’s liberal circles. Young people who imbibed democratic ideals in urban coffee houses and university lecture halls believed the time for action had arrived.

The 18-year-old radical Carl Schurz was a student at Germany’s University of Bonn when he learned of the Paris uprising. He wrote later that he quickly joined a band of protesting students who took to the streets. He recalled that he and his fellows felt “as if a great outbreak of elemental forces had begun, as if an earthquake was impending.”1 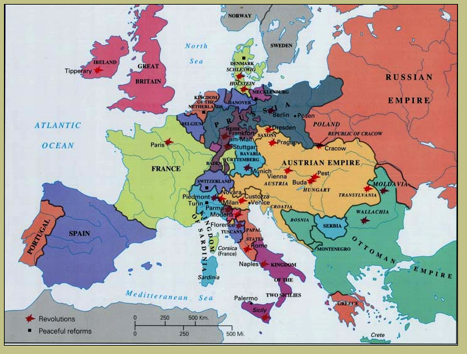 Map shows locations of armed revolts in Europe in 1848.

The revolutionary forces in Germany were led by Franz Sigel, a liberal military man, and other members of the military also joined the students, liberals, and socialists who decided to risk their lives in the fight to dispose with aristocratic control and create a new Europe.

Democrats won temporary victories in many parts of the continent, but the reactionary forces under the leadership of the Hapsburgs in Vienna and the militarized Prussian state eventually crushed all the revolts.

Sigel and Schurz would soon flee for their lives, along with thousands of other German liberals who would sail to America for refuge from tyrants and secret police. Here, the Forty-Eighters would form the backbone of anti-slavery Republicanism in the rapidly growing German immigrant communities. Both Schurz and Sigel would serve as Union generals during the Civil War, just a few years after they became citizens. Schurz would later be elected to the U.S. Senate and finish his career as Secretary of the Interior.

His name may sound familiar to New Yorkers: The park across from Gracie mansion in Manhattan is named after the young radical.

In 1848, ecological disaster struck Ireland. The potato blight destroyed the main food crop of the Irish people and an already weakened population began to die off by the tens of thousands. Thomas Francis Meagher and other revolutionists in the Young Ireland movement agitated for a revolt against British rule. They were quickly suppressed and Meagher and his comrades were arrested and sentenced to die.2

With no relief from starvation or British oppression, hundreds of thousands of Irish peasants crammed into coffin ships in 1848 and during the years immediately afterward, bound for North America. Thomas Meagher escaped the British and would soon join his people in America and become their military chieftain during the Civil War.

Of even more importance to the United States than the drama in the Old World was the 1848 conclusion of the war with Mexico following the signing of the Treaty of Guadalupe Hidalgo.
Ulysses S. Grant, a hero of the Mexican War, wrote years later that he “bitterly opposed” the war and said that “to this day regard the war…as one of the most unjust ever waged by a republic.”3 Abraham Lincoln spoke out against the war from the floor of the House of Representatives during his only term in Congress, challenging it as a war of aggression by the United States.4 Both Grant and Lincoln, as well as many other members of their Whig Party, saw President James Polk’s war as a bid by Southerners to extend slavery into new territory in the Southwest.5

Whatever the justice of the Mexican War, its impact on the United States was undeniable. Nearly half of Mexico was now part of the United States. And the competition over whether the new states formed from the conquered territory would be free or slave states accelerated the onrush to civil war.

The treaty ending the war also incorporated thousands of Mexicans in what are now Texas, New Mexico, Arizona, and California into the United States. While the Treaty of Guadalupe Hidalgo guaranteed these Mexicans the right to become full and equal US citizens, the large Latino population immediately assumed second-class status.6 Called “greasers” by their Anglo-Saxon neighbors, the new Latino Americans would not achieve the equality promised by the treaty until the Civil Rights Movement of the 1960s changed race relations forever.

That same year, before the treaty ceding the Mexican territory was signed, gold was discovered in American-occupied California. The Gold Rush that followed bought the first Chinese workers to America. In fact, before the fateful year was out, the first boatload of Chinese had already landed in San Francisco bringing miners who hoped to strike it rich in the area around Sutter’s Mill.

The fact that the overwhelming portion of these 1848 new Americans went to the free states would have no small impact on the outcome of the Civil War. The North absorbed 90 percent of the new immigrants, adding tremendously to its economic power and military strength in the Civil War era.  Ultimately, the decisions immigrants made on where to settle would help determine the outcome of the war.

The 1848 immigrants and those who followed didn’t just help win the Civil War, they began the construction of the vibrant multicultural America we live in today.

Read about one of the 48ers and the impact he had as Lincoln’s adviser in Carl Schurz: From German Radical to American Abolitionist.

Read the first installment of our new series The Immigrants’ Civil War.

Feature Image: The Revolution of 1848 in Germany.