In 2010, I visited an apartment complex in Hempstead and spoke with a young man who was finishing high school and considering a career in law enforcement. His mother had come to Long Island from the Dominican Republic, and the apartment she could afford was in a building plagued with gang activity in the courtyard. Since he was a child, the young man had served as an impromptu translator for neighbors when they called the police, who never seemed to speak Spanish.

He wanted to become a cop to serve his community. No one cared about the gang problem in Hempstead, he told me, or whether kids were caught in the crossfire. He cited one exception: STRONG Youth.

For more than a decade, STRONG Youth has been doing gang prevention work in Nassau County, trying to inspire young people to stay away from criminality, as well as standing up against “wholesale incarceration and punitive systems.” This is not popular work, since most people view gang members akin to neighborhood terrorists. But for the at-risk youth impacted by STRONG, the organization is a lifeline.

Nassau County Executive Ed Mangano effectively severed that line in May when he cut $7.3 million in county funding earmarked for youth services, $200,000 of which would have gone to STRONG. Mangano isn’t the only politician at fault. As always, Democrats and Republicans in the legislature are deep in a game of horse trading; Dems want a more favorable redistricting plan, Mangano and GOP allies want to be able to borrow money to cover commercial property tax refunds. But Mangano, without a doubt, is at the helm. And he’s chosen to treat organizations like STRONG as disposable.

Groups are understandably upset. Since the cuts were announced, hundreds of people have gathered in front of the legislature in Mineola to voice their opposition. Op-ed columnists and letter writers have hammered Mangano for balancing the budget on the backs of Nassau’s most vulnerable.

One of the leading groups of the opposition struggle is STRONG Youth. Led by Executive Director Rahsmia Zatar and Founder Sergio Argueta, they’ve held a mock funeral for the programs that have died as a result of “Ed Mangano’s Youth Tax” and shown up at a legislative hearing bound and gagged, as “political hostages.” 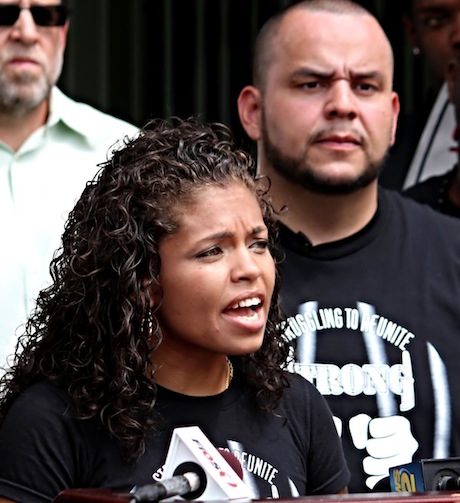 While not visibly bothered by the thought of more kids joining gangs or succumbing drug addiction, Republicans in the legislature have voiced dismay with the tactics of the protesters. Apparently it’s not enough to get robbed of county funding; you need to smile at the burglars and offer them tea.

Presiding Officer Peter Schmitt (R-Massapequa) and Legis. Rose Walker (R-Hicksville) criticized the group at the Aug. 6 legislature meeting where adult volunteers and teens dressed as hostages. Schmitt suggested he should have called child protective services and Walker said she was “sickened” by the display. Nassau Social Services Commissioner John Imhof later sent an email to community groups criticizing the act.

“When people call us radical and say we’re extremists, what’s extreme and radical is them putting us in the middle of this chaos,” Argueta said.

I never expected Mangano, who rode into office on the Tea Party wave of 2010, to increase county spending on programs that aid low-income households in Nassau County. At the same time, I never would have imagined he would entirely defund existing programs, especially when those programs had their own funding stream from county red-light cameras.

For all the outrage from the Republicans in the legislature, you would think the legislators are the ones losing funding (they’re not). For some Nassau residents, however, the decision to cut funding to these organizations will have real implications, far more important than the short-term political capital at stake in Mineola. The founder of STRONG explains why this matters so much to the communities the organization serves:

“For us this is a matter of life and death,” said Sergio Argueta, who founded STRONG in 2000 in response to the gang-related slaying of a friend. “I’ve buried 32 kids in this community.”

Hear from Amory Sepulveda, a survivor of a random shooting in Hempstead, who spoke on behalf of STRONG Youth at the mock funeral: