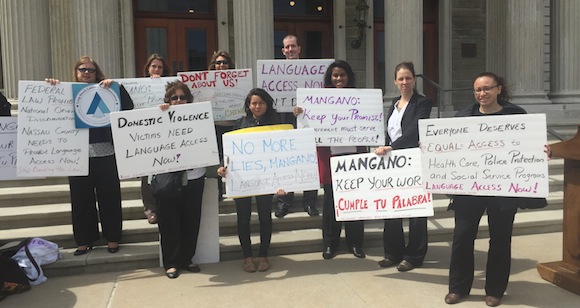 More than two-dozen Nassau County immigrants and their allies addressed the County Legislature on Monday to demand leadership on language access. They asked legislators to pressure County Executive Mangano’s administration to comply with its own executive orders and implement language access programs throughout county agencies.

Executive orders 67 and 72, issued in 2013, guarantee language access services at county agencies to the estimated 130,000 Nassau County residents with limited English proficiency (LEP). The orders should have been fully implemented by July of 2014, but the Mangano administration has not taken the necessary steps or invested the necessary resources to implement them.

Backed by supporters and allies, five community members and advocates testified at the legislature, sharing experiences of being turned away from the Department of Social Services and the Nassau County police, including one incident which put a family’s food stamp benefits at risk. Advocates revealed they had been engaging in another round of compliance testing in recent weeks, and found appalling shortcomings.

In many instances, county workers laughed at, insulted, or hung up on LEP clients. (Click here for one person’s experience with more than 11 agencies.)

“Recently a client of ours was sanctioned by the Department of Social Services (DSS) resulting in the loss of her food stamps,” said Keiko Cervantes-Ospina, supervising attorney at the New York Legal Assistance Group. Her client, she said, was not provided a capable interpreter, which prevented her from fully participating in the conversation about her benefits.

Cervantes-Ospina added that this and similar situations are avoidable. “Uniform compliance with language access executive orders across county agencies will ensure equitable access to programs and benefits. It needs to start with staff and personnel training and it needs to start now,” she said.

In addition, Long Island Wins participated in the testing. Out of eight calls that were made by our Spanish speaking testers, in all but two instances an interpreter was not provided. One of the interpreters was clearly not fluent and addressed the female caller as “Mami,” which is considered derogatory and sexist to Spanish-speaking women. During another call with Nassau County Police, our caller was asked how long she lived in the U.S. and then derided for having not learned enough English in that time. While a few operators were polite, most were downright hostile.

Cheryl Keshner, a paralegal at the Empire Justice Center and head of the Long Island Language Advocates Coalition, noted that, in addition to being mandated under the 2013 executive orders, language access is guaranteed under Title VI of the Civil Rights Acts, which bars federally funded agencies from discriminating against individuals on the basis of national origin.

“Nassau County Executive Mangano has failed to follow through on numerous promises to provide interpretation and translation services at county agencies,” she said. “We are here today to call upon the Nassau County legislature to uphold the law and to take a stand against national origin discrimination in Nassau County.”

She also listed 10 demands that would put the county in compliance with the executive orders:

Failure to implement language access means government services remain largely inaccessible for the LEP Nassau residents, many of whom are elderly, disabled, or newly arrived immigrants. Lack of language access endangers community members who need emergency assistance during a crisis and puts entire communities as risk.