The resolution, “Understanding, Accepting, and Respecting Our Cultural Differences Week,” was sponsored by Legislators Ed Romaine, DuWayne Gregory, and Vivian Viloria-Fisher, and passed unanimously in the legislature on March 22. The county executive will need to sign the measure before it can be adopted.

Legislators worked closely with the Long Island Immigrant Alliance in crafting the resolution, and that organization’s director, Luis Valenzuela,—who is also a Long Island Wins steering committee member—spoke in support of the measure during the public portion of the legislative session.

“Marcelo Lucero’s name has become a symbol; unfortunately, it’s associated with hate,” Valenzuela said. “What we have here today is an opportunity to start to change that.” 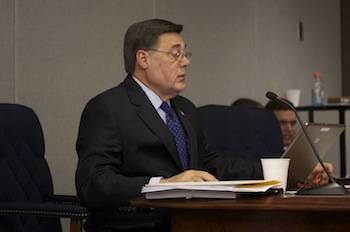 A range of Suffolk County community leaders also addressed the legislature, including Joselo Lucero, a community activist and the brother of Marcelo. He challenged legislators to stop thinking about immigrants as “illegals” and discard negative stereotypes.

“You know what is for me an illegal?” he asked. “A person coming to America to see a dream come true.”

If the resolution is passed, it may also pressure legislators to avoid introducing bills that target immigrants, a point reiterated by Romaine (see video clip below). In the past decade, Suffolk County politicians have been criticized for fueling anti-immigrant sentiment with their policies and words.

The pastor of the First Baptist Church of Riverhead, Rev. Charles Coverdale, called on Suffolk legislators to consider the moral reasons for fostering culturally inclusive communities in the county:

“We still have the chance to follow the guidance of our better selves,” he said. “I urge you to make Suffolk County a place where all people can live with dignity.”

Luis Valenzuela on why the resolution marks an important step for Suffolk County:

Legis. Ed Romaine on what effect the resolution might have on anti-immigrant legislation:

Joselo Lucero highlights the importance of education in combating hate:

A copy of the resolution:

RESOLUTION NO. -2011, ESTABLISHING “UNDERSTANDING, ACCEPTING, AND RESPECTING OUR CULTURAL DIFFERENCES WEEK” IN REMEMBRANCE OF MARCELO LUCERO

WHEREAS, the United States has long been considered “the great melting pot”, where people of different ethnicities, nationalities, cultures and faiths come together to live in harmony; and

WHEREAS, the differences among us, in familial background, abilities and life experience, have created and sustained our nation’s rich and vibrant culture; and

WHEREAS, there are individuals in our society who do not embrace our collective differences, but instead choose to act out against persons whom they perceive as different from themselves, as was demonstrated most clearly in the tragic death of Marcelo Lucero in November 2008, who was attacked and killed by teenagers in Patchogue; and

WHEREAS, following the death of Mr. Lucero, residents throughout Suffolk County came together to denounce such hateful acts and encourage acceptance, understanding and an appreciation of our differences; and

WHEREAS, Suffolk County should continue to foster an atmosphere of engagement and acceptance among all County residents towards all members of our community; now, therefore be it

1st RESOLVED, that the week of November 6 – 12, 2011, and every second week in November in each year thereafter shall be designated “Understanding, Accepting and Respecting Week” in Suffolk County, to nurture an environment that respects, protects, and promotes the human rights of all Suffolk County residents; and be it further

2nd RESOLVED, that this Legislature, being the State Environmental Quality Review Act (SEQRA) lead agency, hereby finds and determines that this resolution constitutes a Type II action pursuant to Section 617.5(c)(20), (21) and (27) of Title 6 of the NEW YORK CODE OF RULES AND REGULATIONS (6 NYCRR) and within the meaning of Section 8-0109(2) of the NEW YORK ENVIRONMENTAL CONSERVATION LAW as a promulgation of regulations, rules, policies, procedures, and legislative decisions in connection with continuing agency administration, management and information collection, and the Suffolk County Council on Environmental Quality (CEQ) is hereby directed to circulate any appropriate SEQRA notices of determination of non-applicability or non-significance in accordance with this resolution.
DATED: