Last night I joined dozens of Long Islanders as they traveled to Lower Manhattan to march in support of Occupy Wall Street, an ongoing action aimed at the vast and growing economic disparity between rich and poor in the US, as well as the corporate misdeeds that have widened the divide.

The march, which drew an estimated 15,000-20,000 people, received a powerful boost from unions. As I rode into the city, I had the chance to talk about union participation with Michele Lynch, the Long Island political director of 1199 SEIU United Healthcare Workers East and a Long Island Wins board member.

“This an an attack on Wall Street and on the greed that’s taken place by the one percent of the richest people,” Lynch said. “We’re there to assist them and support them in any way we need to to bring more attention to what’s going on in this country, instead of people buying into the rightwing rhetoric that’s been going on in the last year.” 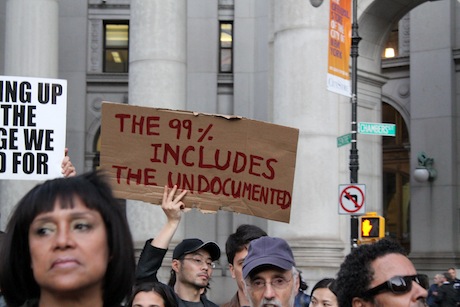 Suffolk County Legislator Vivian Viloria Fisher (D-East Setauket) was also on the train with us. To my knowledge, she was the only Long Island elected official who attended the march.

She explained why she decided to support the effort:

“There was just a study done by the planning commission stating that there are two groups on Long Island whose numbers are growing: the very rich and the very poor,” Fisher said. “The group whose number is shrinking is the middle. So we’ve created a structure of rich and poor, a two-standard or a two-class system, and that’s because of corporate greed.” 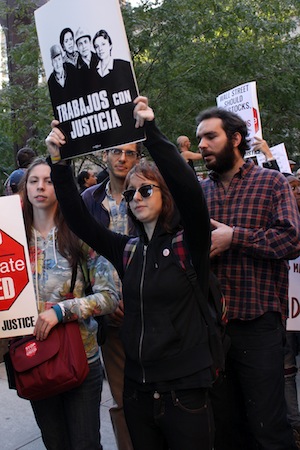 In addition, I spoke with another Long Island Wins board member, Charlene Obernauer, the executive director of Long Island Jobs With Justice. Her organization helped inform people about the action.

Watch the slideshow below to listen to her speak about how Occupy Wall Street relates back to immigration, and to see photos from the march:

Here’s a slideshow with more than 100 images from the march and demonstration: