A group of 21 Long Islanders from various faiths and backgrounds united at the Masjid Darul Quran in Bay Shore on Friday to join in solidarity with the Fast for Families at the National Mall in Washington D.C. to call on Congress to pass comprehensive immigration reform.

The daylong fast is intended to highlight the nation’s broken immigration system and demand that House Speaker John Boehner schedule a vote for comprehensive immigration reform. The 21 fasters, which included community and faith leaders, as well as myself, honored the courageous immigrants and allies who have been fasting as long as 22 days as part of Fast 4 Families in Washington. They were joined by religious leaders to share how the broken immigration system has affected their families and communities. 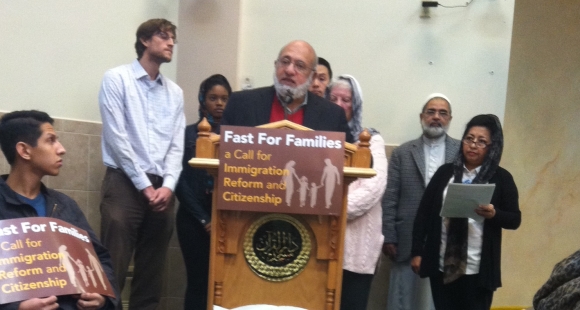 “There are 11 million people who are looking for some kind of pathway to citizenship—Muslims, Jews, and Christians,” said Dr. Hafez Rehman, member of the Suffolk County Human Rights Commission. In solidarity with all of them, we are fasting.”

I personally joined the fast because I strongly believe in the cause, and giving up food for a day is a small sacrifice to make for the greater good of bringing attention to our broken immigration system.

“I am here today because 11 million of my brothers and sisters are still suffering due to our broken immigration system,” said Fernando Sosa, member of Make the Road New York. “I am abstaining from eating today, but this discomfort doesn’t compare to the emotional and physical discomfort that undocumented families go through every day when they are separated or have to live in the shadows prompted by the threat of being separated. We cannot go through another holiday season living in fear. The time is now for Speaker Boehner to put this bill up for a vote in the House.”

A group of immigration reform activists had been fasting on the National Mall in Washington D.C. for 22 days before finally breaking their fast on Tuesday. Four demonstrators, including the SEIU’s Eliseo Medina, ended their hunger strike on the 22nd day and passed the torch to seven others who will fast in their place. Most of the fasters went without food for more than three weeks, only consuming water during that time.

The new group will include members of Congress who will each fast for one day before passing the torch over to another member.

The efforts that are being taken across the country to call for immigration reform signify the dire need to fix our broken immigration system. Every day, more than 1,100 families are torn apart because of senseless deportations. This simply cannot go on any longer.

The time is now for comprehensive immigration reform which keeps our families together. Be sure to reach out to your local representatives to let them know how important this issue is to all of us.