When I arrived in Patchogue yesterday, I passed a man with two large signs standing in the street a block from where Marcelo Lucero was murdered. One sign said “Deport Illegals.” The other announced, “When they jumped the fence they broke the law.” Some carloads of men stopped, gave a thumbs up, and honked their horns in support. They knew that the family and friends of Marcelo were in the neighborhood, but they rejoiced in the fear and anger they were causing.

I parked my car on Main Street, hoping that by parking far away from the vigil for Marcelo Lucero being held at the railroad station I would avoid any possibility of confrontations with the clusters of white men roaming the streets. I saw a giant pick-up truck flying an oversized American flag from the back rolling down the street. When he saw I was taking a picture of it, the driver stopped so I could take a shot. He rolled his vehicle up and down the street dozens of times, apparently to reclaim Patchogue from its multicultural residents. 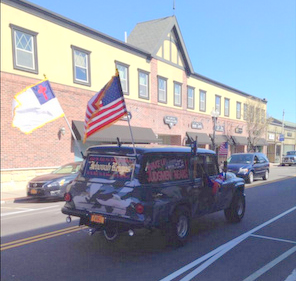 I watched the truck roll by while I was standing outside the local camera store where Jeff Conroy and his six confederates were stopped by the police minutes after they mortally wounded Marcelo. Across the street was the Latin restaurant where another of the “beaner hoppers’” victims worked. 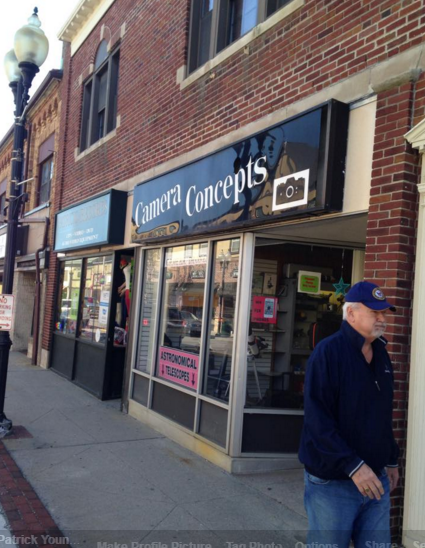 Every so often I saw men loudly yell “Build the Wall” near Latinos and then gleefully high-five one another.

Some businesses displayed signs dissenting from the resurrection of hate in the village. One flew a homemade banner that said that “Patchogue is union, integrity, and culture.” Professionally designed signs saying “Hate is not welcome in Patchogue. Make America Love Again” were stuck in some yards. 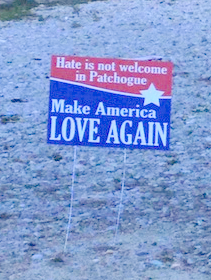 I dipped into a Chinese restaurant for some soup for lunch and the teenager behind the counter asked if I was going to the anti-immigrant rally. I told him no, I was on my way to the vigil for Marcelo. “Me Too!” he exclaimed smiling. He said that a lot of the non-white people in the village were afraid to be out that afternoon because they remembered what happened eight years ago and were afraid it would happen again. He thanked me for being there, and I thanked him for having the courage to step forward.

I followed, in reverse, the route Lucero’s killers took as they walked away from the man whose life they had stolen. When I arrived at the railroad station I remembered being in the same place the day after Marcelo died. I recalled the stains from his blood still visible then. I walked over to where he had fallen in an alleyway. His picture was there, and few burning candles. As people arrived at the site, they were drawn to that spot. Some began to cry. I saw a man who lived in a house on the block come out and comfort one of those mourning.

Then I saw Joselo Lucero, the brother of Marcelo. He had spent the week speaking out in condemnation of anti-immigrant hatred. You could see that the week had taken a lot out of him. When he saw me, he smiled, as he often does, and said “Hi Pat, how’s your family?” Two hours later he would deliver a powerful address to us, with tears filling his eyes and emotion ripping in his voice. 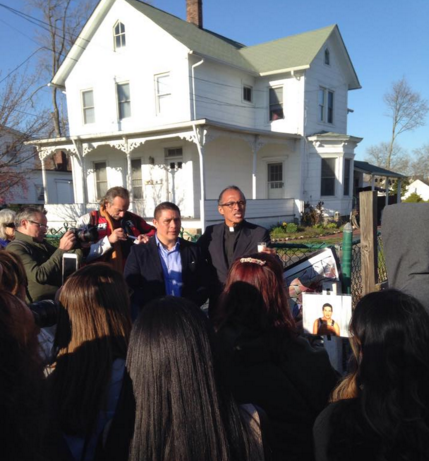 When I heard him speak, I thought about those who said that “The Lucero Family is being used for political ends.” What an incredible statement. As though because he is an immigrant, because he is Latino, because he is not white, Joselo Lucero does not know his own mind. Marcelo was not just Joselo’s older brother, Marcelo had been Joselo’s father since their dad died when Joselo was six. Marcelo had financially supported him, cared for him, and loved him. Joselo was not doing the bidding of any politician, he was protecting his brother’s legacy and holding up his hand to protect his community from the return of the hatreds that claimed his brother’s life.

While I listened to the prayers offered for two hours at the murder site, I thought of a poem from William Butler Yeats. One line goes like this: “Too long of a sacrifice can make a stone of the heart.” Joselo’s sacrifice had not turned his heart to stone. Instead, he had responded with love and compassion. Yesterday, I saw his heart bleed in public as he spoke.