On Sunday, March 5th, nearly 100 people met at the Southampton Town Senior Center for a town hall on the various issues facing vulnerable communities in the area. The meeting was hosted by the South Fork Unity Collaborative, an initiative from the Long Island Unity Collaborative, a group of faith and human rights organizations.

Many participants asked about healthcare, LGBTQ rights, women’s rights, immigration issues, Islamophobia, Antisemitism, hate crimes, and how to help their children feel safe. As community organizer Lisa Votino-Tarrant pointed out, however, these issues are all tied together, and as a community, they must stand together: “Don’t pigeonhole yourself. These issues affect peoples’ lives on a daily basis.”

Additionally, there were worries about the state of services in the area, which have been stretched thin for some time. “It started in 2007, and it’s only gotten worse,” Epifania told the crowd, “We don’t have the trained people to work on these issues with them, and we have a great need.”

Solis reminded the audience that they have access to First Amendment rights to freedom of speech, the Fourth Amendment rights against unlawful search and seizure, and the Fifth Amendment that protects the right to remain silent. “Constitutional rights apply to all persons living in the U.S. regardless of their immigration status,” she told the crowd. 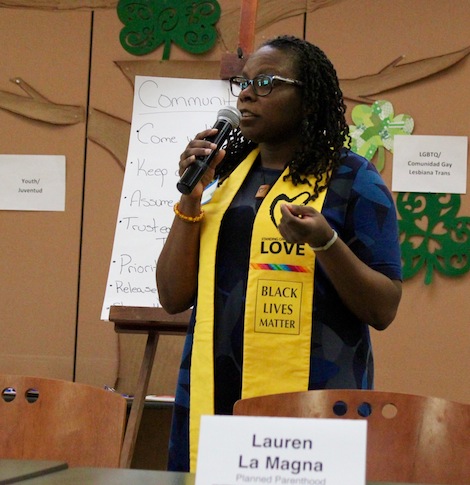 Participants were urged to sign a pledge to “support community members who are in pain and fear for their safety, dignity and well-being…in the face of heightened racial and social tensions as a result of the 2016 election season.”