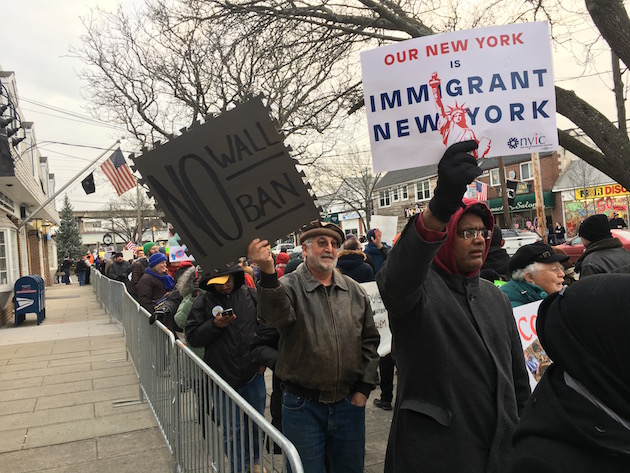 On February 3rd, nearly 200 people marched outside the Massapequa office of Congressman Peter King, who represents New York’s Second District. The purpose of the rally was to protest against King’s support of President Trump’s executive orders banning refugees and Muslims. The route of the protestors stretched across the entire Park Boulevard sidewalk in front of the office.

Residents from both Nassau and Suffolk came to protest in front of the office, with representatives from local organizations including Make the Road, Sisters of St. Joseph, Long Island Transgender Advocacy Coalition, 9/11 Families for Peaceful Tomorrows, and New York Civil Liberties Union.

As the rally progressed, thirty-five counter-protestors arrived and shouted slogans such as “build the wall” and “go home.” Rally attendees then settled towards the end of the route and chanted across from the counter-protestors. The officers from the Nassau County Police Department kept the two groups apart and made sure to keep the sidewalk clear of both protestors and pedestrians.

Juli Grey-Owens, the Executive Director of the Long Island Transgender Advocacy Coalition, tells Long Island Wins that the rally challenges the congressman’s views on the community’s immigrants and refugees: “Representative King has made it clear that he supports President Trump’s executive order on immigration. We are demonstrating to show the Congressman that he is out of step with the beliefs of those he represents. Long Islanders understand that we are all former immigrants and refugees from another time and, as such, should be extending our support to those who are in critical need of safety.”

Many at the rally argued that Congressman King was not accurately representing his district. Jennifer Grinberg of Seaford, a member of Together We Will Long Island, tells Long Island Wins, “I am here basically to tell our congressman that we’re tired of him not listening to the constituents… we have no communication with him, he basically bars us.”

While the rally did much to raise awareness and make a statement, Adolfo Galdamez of Make the Road Action tells Long Island Wins that this is just one step in the right direction, as translated from Spanish: “We are fighting, we are against [the executive orders] because we do not accept what our administration of our country is doing. And we’re going to keep fighting to have the respect and unity of our communities.”