In response to my request for the identities of the nineteen men who marched with the Proud Boys in Bay Shore and Patchogue on Saturday, I received a number of identifications. I don’t want to publish any names until I can confirm the identities. However, I received an email this morning from a man who says that he “may…be one of them.” Here is his name and photo from his email:

As you can see, he is wearing a Trump hat and carrying a rifle of some sort.

In May and June, Cini attracted attention by unfurling “Trump Won” banners at major league baseball games. In a video of an incident at Yankee stadium, spectators can be heard booing him (a few clapped). When a security guard approached to ask him to remove the banner he responds with the F word. An NYPD officer then asks him to remove the banner and he refuses the lawful order of a police officer. When Cini and his companion are removed many in the crowd have words with him as he is taken away. He has now been banned from attending baseball games by Major League Baseball. Here is a photo Cini took of himself with the letter banning him. 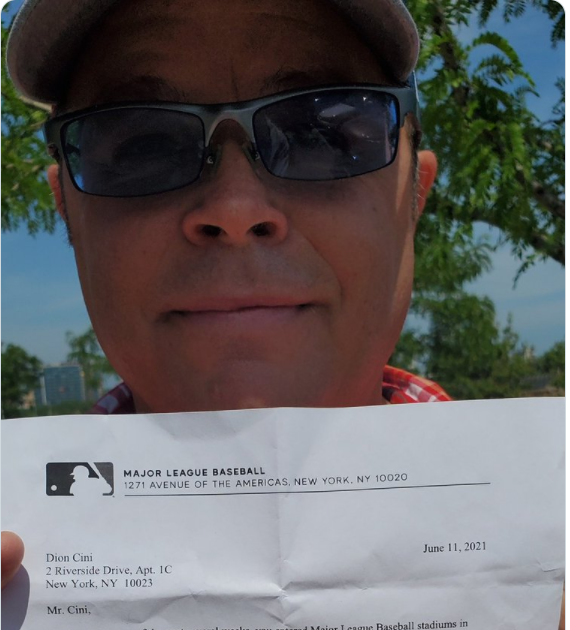 The photo resembles this Proud Boy videoed at the Bay Shore march: 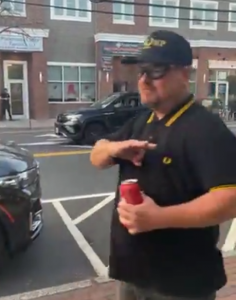 Since Cini did not say which of the photos I posted was of him, this is still a soft ID.

As you can see, Cini is not a Long Islander. The letter from MLB identifies him as living at 2 Riverside Drive, Apartment 1C in Manhattan.

Cini has also been banned from Disney World for his far-right activities.

Since Cini is a ceaseless self-promoter, I take all his claims with some doubt.

Here is Cini’s email to me: