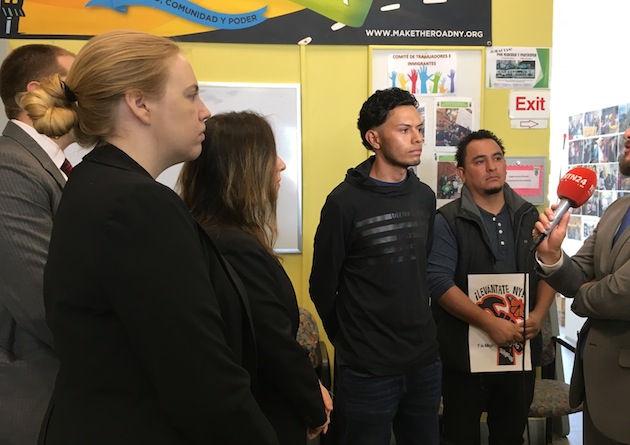 On Tuesday, April 18th, three immigrant workers filed a charge with the National Labor Relations Board, saying that they were unjustly fired after a walk-out on February 16th, which was the “A Day Without Immigrants” strike. Their former employer, International Warehouse Group, located in Melville, fired ten employees after they participated in the protest and abstained from work in solidarity.

In a press conference held at Make The Road NY’s Brentwood office, two of the former employees explained to the press that International Warehouse Group exploited their labor. One of the immigrant workers, who wished to be referred to simply as Eric, said that their managers were incredibly strict about breaks. “They were always checking the time we were in the bathroom – we could not be there for longer than 3 minutes,” Eric explained in Spanish, “If we were one minute late coming back from lunch, they would put a lot of pressure on us.”

Juan Baraona, another former employee, discussed how their employer would often force them to work in 12-hour shifts or longer, and it was those harsh conditions that motivated him and his co-workers to protest. However, their managers made it clear there would be dire consequences if they participated. “My boss walked around the day before [the protest], threatening that they would fire us if we protested,” Baraona said.

Elizabeth Sprotzer, an attorney with Make The Road NY, explains that her clients are protected by law to take part in the protest. “We filed a charge with the National Labor Relations Board, that the termination of our clients violated Section 881 of the National Labor Relations Act, and that they were engaging in protected concerted activity and that they were fired for doing so,” Sprotzer said. “We are seeking all legal remedies under the law.”

The National Labor Board will need to investigate the allegations of the termination, including hearing testimony from the three workers who filed the charge. The board can then issue a complaint against International Warehouse Group and a hearing with an administrative law judge will be scheduled to determine whether the company violated the National Labor Relations Act.

For those exploited immigrant workers seeking to come forward and get legal help, Walter Barrientos of Make the Road NY advised that they should “capture and write down everything that they know, that they are dealing with. It’s important for us to know dates. Even if it’s hand-written, [it’s important] for them to keep a record of the conditions they are experiencing and ideally, keep track of names of other workers who have been fired who have endured similar situations.”

Watch the entire press conference below: