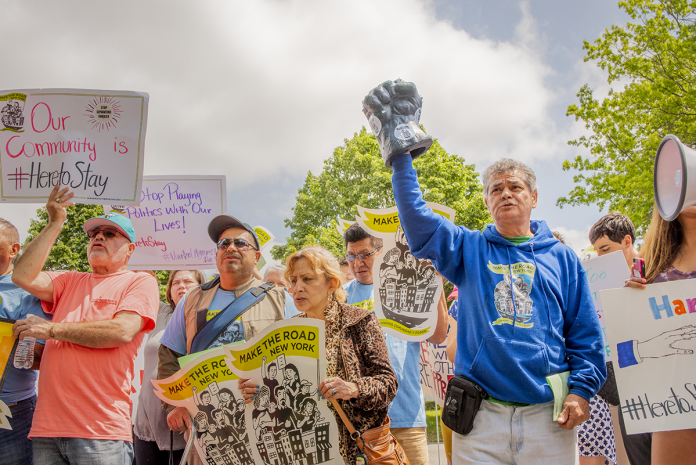 This Wednesday, advocates mobilized to Bethpage to forcefully reject President Trump’s return visit to Long Island and his characterization of immigrants as “animals.”

“Trump isn’t coming to Long Island to make America great – he’s just using Long Island to boost his flagging poll numbers by stoking fear and resentment. What he won’t tell you is that his administration is actually making America more dangerous by interfering with local law enforcement efforts to combat gang affiliation and profiling immigrant youth of color,” said Anu Joshi, director of immigration policy at the New York Immigration Coalition. “We need our local and state officials to stand strong against Trump and discern the difference between fearmongering and facts.”

Trump also came to Long Island last July after tragic gang violence struck the region at the hands of MS-13. As he did then, he continues to politicize the situation for his own ends to stir up anti-immigrant sentiment.

“Long Island has fought against racism for African Americans, it has fought against prejudice against Catholics, against Jews, so I can tell you that Long Island will overcome the hatred against immigrants,” Angel Reyes, DACA recipient and community organizer with LatinoJustice PRLDEF, said at the rally.

Those in the Trump camp argue that he was referring solely to gang members, which might be excusable in any other context, and perhaps with any other president. However, knowing his track record, we know there is more under the surface. In fact, the New York Immigration Coalition released last week a new report, Swept up in the Sweep: The Impact of Gang Allegations on Immigrant New Yorkers, diving into that very subject.

Congressman Thomas Suozzi partially supported Trump for his attempts to crackdown on MS-13, but called him out for his abhorrent description of immigrants.

“But Mr. Trump’s failure to distinguish properly between MS-13 members and other immigrants, along with his divisive, discriminatory language, particularly against immigrants from Latin America, hampers efforts to rid our communities of MS-13,” Suozzi wrote in the Wall Street Journal on Wednesday. “The president’s inflammatory rhetoric is counterproductive to the goal that we the people, including new arrivals in America, seek – to live in peace, security and happiness and to eradicate MS-13.”

Immigrants and their allies hosted a press conference on Tuesday in front of the Nassau County Legislature in Mineola to preface the rally and also to hold county officials to task. There, they made it clear that Trump is merely attempting to capitalize off of the recent tragedies of gang violence.

“We are here to say no . . . He has constantly attacked immigrant communities, first calling them criminals and rapists, and then in the past week repeatedly referring to them as animals,” said Walter Barrientos, Long Island organizing director for Make the Road New York, speaking at the press conference. “That is what we’re here rejecting today.”

Though Trump has a strong hand in giving a platform to the forces working against the immigrant community, advocates called upon local officials to take a stand against the toxic rhetoric.