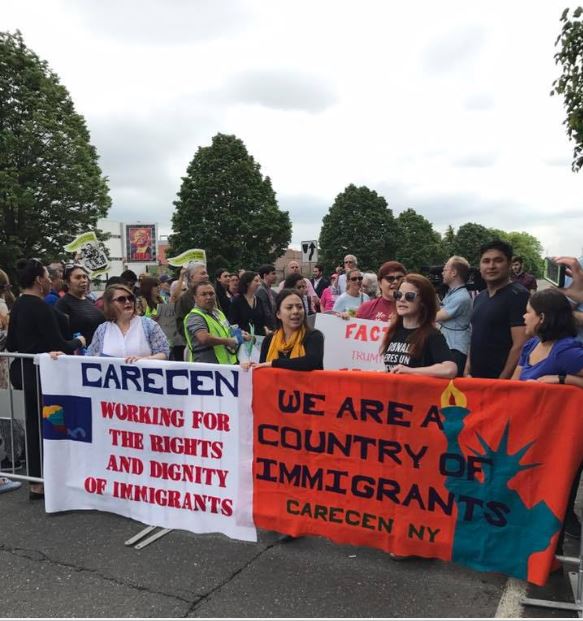 Dozens of Long Islanders rallied outside of a press event in Bethpage put on by President Donald Trump. Trump called it a “forum” on MS-13, but he did not invite the immigrant community that is most impacted by the gang. It was a bunch of white people, talking to other white people, about brown people. Sad.

This was the fourth anti-immigrant circus in two years held by Trump on Long Island. I went because, like many of you, I am sick of the most powerful man in the world using my neighborhood to win votes by stirring up hatred and fear.

I have been within a hundred yards of all four of Trump’s appearances. I remember each one.

There was the $500 a plate fundraiser in Patchogue in 2016 held just three blocks from the spot where Ecuadoran immigrant Marcelo Lucero was killed by a white supremacist lynch mob. Trump relished bringing the message that immigrants are not welcome here to a millionaires’ party within shouting distance of the murder scene. Every outlet from the BBC to the LA Times covered it.

You could see the glee of Trump supporters that day. They were finally freed from the restraints of polite society and were able to express their racism freely. I remember seeing a brand-new pickup truck pull up to a couple of Latino pedestrians. One of the occupants of the vehicle yelled out “Build the Wall” at the startled Latinos. No racism there at all.

There was Trump’s Brentwood appearance before Suffolk cops last summer where he told them to rough-up Latino suspects. That one made national news. Clips of it still get replayed today. What was even more frightening was the laughter and clapping from the nearly all-white cops listening to his advocacy of police brutality.

And then there was his speech two years ago right in Bethpage, in the building where Grumman made the Lunar Module for NASA. Thousands of Trump supporters lined up to get into the historic shed to hear candidate Trump lead chants of “Build the Wall.” Really, that was a thing. Over and over and over. Who needs a policy when you have a bumper sticker.

Today I was outside a Trump event yet again. This time the pro-Trump rally across from us had barely a dozen folks. They looked sad. They must have wondered “Where is everyone?” 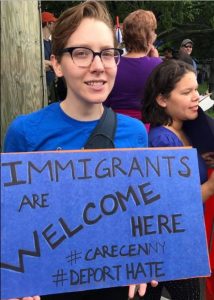 Today the president was not focused on the Wall. Instead, he was smearing Long Island’s immigrant communities as the dens of criminals and animals. He claimed that he was only talking about gang members in his derogatory remarks, but his so-called “anti-gang” sweeps have mostly swept up unfortunate young immigrants who have nothing to do with MS-13. Like most of the other hundred folks at our rally, I was there to say that the libel against Long Island immigrants is doing irreparable harm and should not be supported by our elected officials.

I was glad to see that Suffolk’s County Executive Steve Bellone skipped Trump’s poorly attended circus. How could they face their constituents if they had gone. Unfortunately, Peter King paid court to the circus master-in-chief. I suppose that the two men thought that the event would distract the media from Russia and Stormy for a day, at least.

Screaming that immigrants are animals does not bring us one inch closer to that goal.