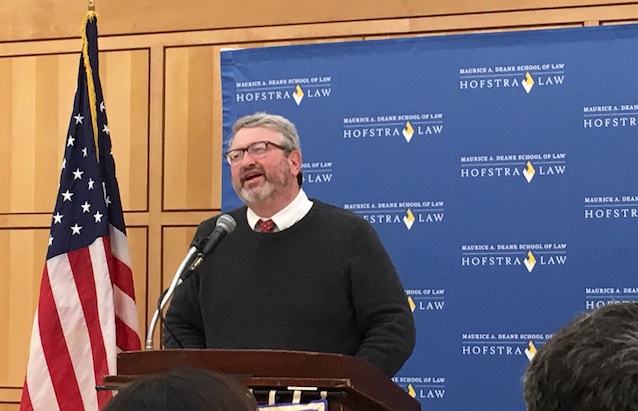 Hofstra University announced on February 15 that it is setting up a Deportation Defense Clinic at its law school. The announcement comes as part of the university’s response to President Trump’s immigration initiatives. There are an estimated 70,000 to 80,000 undocumented immigrants on Long Island who have lived in terror of being arrested and deported ever since the new president was inaugurated.

University President Stuart Rabinowitz spoke up about the need for such a clinic as far back as November 2016. He assigned the planning for the creation of the clinic to Theo Liebman, the director of the law school’s clinical programs, and to Clinical Instructor Lauris Wren. Professor Liebman has played a leading role in organizing legal services for child refugees from Central America, and Professor Wren, a former CARECEN staff attorney, heads the school’s Asylum Clinic. The two have been working around the clock to get this clinic off the ground.

Approval of the clinic came against the backdrop of highly-publicized ICE raids in thirteen states initiated by the Trump administration. The law school’s new dean, Judge Gail Prudenti, pushed the clinic proposal through in just weeks. She and President Rabinowitz emphasized that the Deportation Defense Clinic was emblematic of the university’s commitment to work with Long Island’s immigrant community. The law school already has an Asylum Clinic, an Immigration Clinic, and a Youth Advocacy Clinic which helps child refugees.

The law school is hiring two full-time attorneys to run the clinic and expects twenty law students to serve as student-lawyers on deportation cases. Job announcements are already being posted and the clinic will open for clients soon after the staff is hired in Spring 2017.

The new clinic will not focus on general immigration and refugee law. Instead, it will only take clients facing deportation. The initial intakes will be for young people with DACA facing the loss of their protection from deportation if an expected presidential executive order is issued ending the program. The other group will be those with in-absentia orders of deportation issued when the immigrant failed to appear in court. The clinic is deciding how to cope with the expected large numbers of immigrants who may be taken into custody in future ICE raids.

Immigrants in Nassau and Suffolk counties who are facing deportation can contact the clinic at 516-463-5934 or lawclinic@hofstra.edu. Remember, this is not a place to inquire about citizenship or how to renew a green card. It is only for those facing deportation.