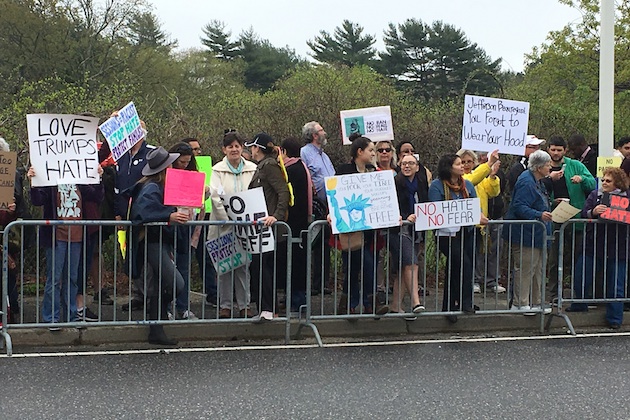 More than 100 people gathered outside of the federal courthouse in Central Islip to protest the Attorney General Jeff Sessions’ visit to Long Island in the wake of the tragic violence that took the lives of four young men in Central Islip. Sessions is using this difficult moment to turn this tragedy into a polarizing political talking point. While the protestors were not allowed near the courthouse, participants made sure their voices were heard.

Several community and faith leaders spoke during the protest, including the President of SUNY Old Westbury Dr. Calvin O. Butts, Salvador G. Sarmiento of the National Day Laborer Organizing Network (NDLON), Rahsmia Zatar of STRONG Youth, Sister Rosalie Carven of Sisters of St. Joseph, Pat Young of CARECEN, and Marcy Suarez from Make the Road NY. One of the fathers of the MS-13 victims also spoke to the crowd in a short statement.

Dr. Butts explained why the community is coming out against Sessions: “If you simply rely on enforcement, more and more Latino men and women will be criminalized and locked up. You can’t lock up this problem, you need to address it with the resources in education, in job opportunities. These are the things that will make a difference.”

Zatar echoed this sentiment in her statement. “As someone who has worked with youth that have been gang involved for years, this is a very clear opportunistic action on behalf of Attorney General Sessions and the Trump administration,” she said. “People of color have been isolated and pushed into communities where corruption has been allowed to fester, where opportunities and resources that our youth are stripped [away], are made to think that the American dream is not made for them.”

“Trump and Sessions have one weapon and that weapon is fear. Their supporters have demonstrated fear of immigrants, change, minorities, fear of the unity of people, people protesting. Look where they put us!” Sarmiento said referring to the location far away from the courthouse and out of sight of Sessions. “This is, lets be clear, a battle between fear and courage. That is the message that Long Island is sending to Jeff Sessions today. We are not afraid of you and we will stand up with our immigrant brothers and sisters. We are united against hate, we are united in love.”

Sessions addressed a crowd inside the courthouse on the federal government’s plan to confront MS-13, specifically citing more enforcement and deportation. Congressman Peter King’s introduction of Sessions also mentioned the demonstration in a disrespectful manner. “To me, it’s shameful, it’s disgraceful, that leaders in the community who claim to be leaders, people who claim to be elected officials, would criticize the Attorney General,” King said. “They should be on their knees thanking him, not protesting.”

United Against Hate Protest
1 of 9