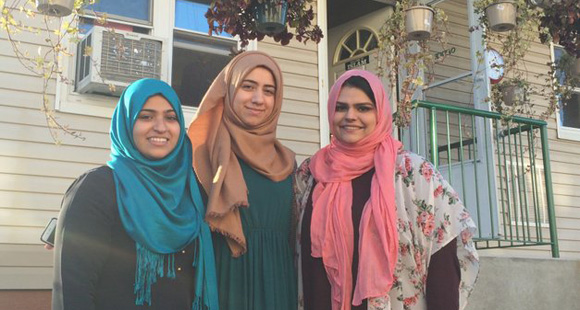 Fear and misinformation can make our minds blind and our hearts cold.

It’s wrong to call all Muslims terrorists.  Many Muslims are actually the victims of ISIS’s violence and terror. Many of them migrate to other nations looking for safety. It has to be clear that they have nothing to do with the terrorist acts that ISIS commits in the Middle East region. True Muslims want and profess peace.

What is also true is that Islam is a peaceful religion that promotes unity among human beings.

Shahla, 20, Misha, 21, and Sabrina, 19, are part of the Islamic Center of Long Island, in Westbury. They were born in the United States. Their parents are immigrants who came here from the Middle East. They are American citizens but also understand their parent’s culture.

Since the Paris attacks, these young Muslims are fearful of acts of hatred and discrimination directed towards them.

“What it first came to my mind is that people are going to be criticizing Muslims, and I am scared of people telling me things or insulting me when I am walking on the streets or when I am in school,” Sabrina said.

The three young women agree that people should not just believe what they hear in the news. In order to truly understand the Muslim community, people need to find out what the Islamic religion is all about. They need to understand that Muslims are not ISIS, they said.

“I think that all around the world there are terrorists that say that they are Muslims but if they were to come to the majority Muslim community no one would accept them,” Shahla said. “I think it’s easy to blame a group of people that we see as minority in America but actually Islam is one of the majority religions in America. We all need to stand up against ISIS and show that no religion stands with ISIS.”

“It’s really heartbreaking because of the ignorance. People just want to follow something and they don’t even know what they are saying,” Misha said. “These ISIS people, they have killed in the past two years over a hundred thousands Muslims, so we are not the people who are doing the terrorists acts, we are the victims,” Misha said.

The anti-immigrant and discriminatory comments of some political leaders that, because of misinformation, don’t want Syrian refugees coming to the United States, have contributed to the climate of fear against the Muslim community. These politicians don’t recognize that Syrians already go through a long and complicated process to come to the U.S. with refugee status.

“Ultimately this is what ISIS wants, they want to install fear into people’s hearts and that is what I see all around me,” Misha said. “America was built on freedom, liberty, the pursuit of happiness and if we don’t accept these refugees we are going against all the foundations America was built upon.”

Shahla, Misha and Sabrina, believe that the entire country should be united in its fight to defeat ISIS.

“Terrorism does not have religion. These ISIS people they claim that they are Muslims but they are not. They just want the whole world to blame one religion, and their goal is to create fear and to separate people and that is what has been happening,” Misha said. “I think that as a nation we need to stand together united. We can’t let fear take over us.”

The three young women believe that ISIS [which call themselves the Islamic State] is against Islamic principles. The said Islam is a religion that promotes faith and peace.

“The most beautiful thing about Islam is that through your connection with God you are nice to everyone, and through our strength with our relation to God every aspect of our life improves and we bring peace,” said Shahla.

“Islam is a religion of peace, we get blessings just from smiling at someone else. If God is with you then nothing and no one can be against you,” Misha said.

And Sabrina, who is also of Hispanic descent [her father is from Pakistan and her mother from El Salvador], and who chose Islam instead of Catholicism, said her religion “is beautiful because everything is love and respect to one another.”