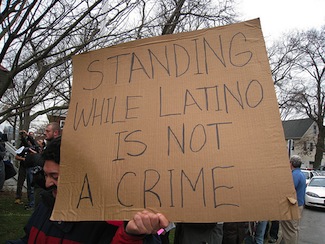 An anti-solicitation ordinance that targets Latino day laborers in Oyster Bay went back to court on March 11 for oral arguments before the U.S. Court of Appeals for the 2nd Circuit.

Our lawsuit asserts that the ordinance, which makes it a crime to solicit employment on the public streets and sidewalks of Oyster Bay, violates the constitutional right to freedom of speech. The New York Civil Liberties Union, along with the American Civil Liberties Union and LatinoJustice PRLDEF, are representing two day laborer membership organizations, The Workplace Project and Centro de la Comunidad Hispana.

Shortly after the lawsuit was filed last May, a federal judge granted our motion for a preliminary injunction to halt enforcement of the law. The town appealed this decision to the U.S. Court of Appeals, which is where the case remains now.

In court last week, Corey Stoughton, a senior staff attorney with the New York Civil Liberties Union, argued our case before the three-judge panel. Stoughton maintained that the ordinance violates the First Amendment right to freedom of speech while the attorney representing Oyster Bay claimed that the town had public safety reasons for enacting the ordinance.

The panel will issue a decision in the coming months. One possible outcome could be that the case will be remanded to the U.S. District Court for further hearings.

The NYCLU and our partnering organizations are hopeful that the courts will recognize that the ordinance is nothing more than a discriminatory ploy to prevent Latino day laborers from earning a living in Oyster Bay.