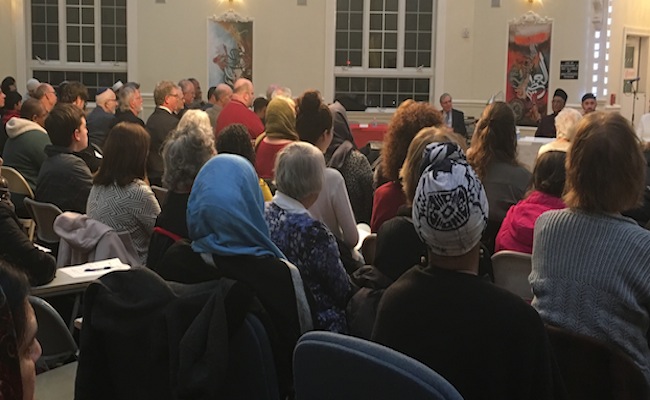 On Sunday, December 18th, members of the community gathered at the Islamic Association of Long Island in Selden to stand together against recent hate incidents in the area. Over 150 people sat in rapt attention as the speakers addressed community concerns and fears about the recent hate crimes in the area as well as in New York City.

Keynote speaker Iman Khalid Latif, the Muslim Chaplin for New York University and the New York Police Department, spoke of his experiences with various institutions, and the kind of love and respect he has been shown by leaders of other faiths. The message was of understanding, empathy, and most importantly communal support for those suffering from the hate of others. He urged those in the audience to take action beyond the walls of mosque: “Our interactions have to be real, not just at the surface, and they have to come to a place where there is real engagement…the beauty of [this gathering] will be that much further realized when this night becomes the night that goes out and ignites within the local community a different way to come together and be together.”

Also present were Detective Sargent Debora Gagliano and Detective Sanford Shulder of the Hate Crimes division of the Suffolk County Police Department. Both reiterated to concerned community members that even if they aren’t sure if certain events should qualify as a hate crime that they should call the police, as they want to collect information on any incidents affecting the community.

People of several different faiths and organizations came to the event in the spirit of unity. Jennifer Bradshaw from Building Bridges in Brookhaven went to the gathering “find more ways to bring people from different communities together.” Activist Kelly Cahill attended to expand her networks, saying, “I am starting to get involved in activism on Long Island and I’ve noticed the networks of people that I organize with tend to be pretty homogeneous. I want to reach out and I feel like you can’t organize against the oppression of a group without having a lot of dialogue with people from that group and really understanding where they’re coming from.”

Tehmina Tirmizi, a member of the mosque’s Education Committee who helped organize the event said that while she was nervous setting up the event, she was happy to be a part of the result: “This has been planned for months and I’m so thankful that people actually came…that was the most important thing for me because I grew up in this area and we interact with people but to a certain level, people have questions that they don’t really ask and this was a good forum for people to be upfront.”