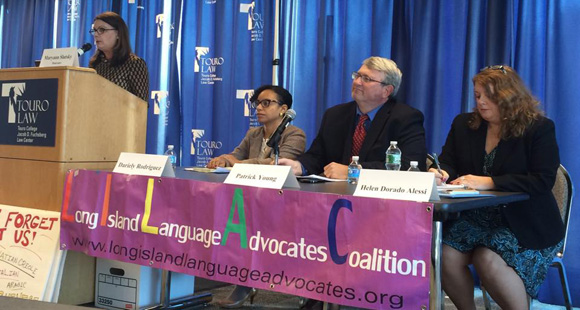 Although there have been initiatives to improve translation and interpretation services through language access programs to benefit the immigrant community on Long Island, there is still so much to do.

This is the conclusion of the Fourth Annual Language Access conference organized by the Long Island Language Access Coalition, LILAC, which took place last week, at the Touro Law School in Central Islip.

“There are a lot of people on Long Island who are concerned about providing equal access to services and programs for immigrants and for others who need language assistance, and we are making progress but there is still a good amount of work to do,” said Cheryl Keshner, from Empire Justice Center, and LILAC.

There is a big need for language access services on Long Island due to the growing immigrant population in this region. The number of people that are not English proficient has also increased. However, some local governments are not paying enough attention to this issue.

For Patrick Young, Director for CARECEN (Central American Refugee Center) and writer for Long Island Wins, this situation is of special concern because the immigrant community is the engine of the Long Island’s economy and it is expected to become a majority in the region’s future.

Language access services are a growing need that not only benefit people who do not speak English, but also benefits the entire community. If someone can make a report to the police department or get the health care that they need, this benefits everybody, Cheryl explained.

Suffolk and Nassau Counties have approved language access polices in recent years, but there have been some deficiencies. 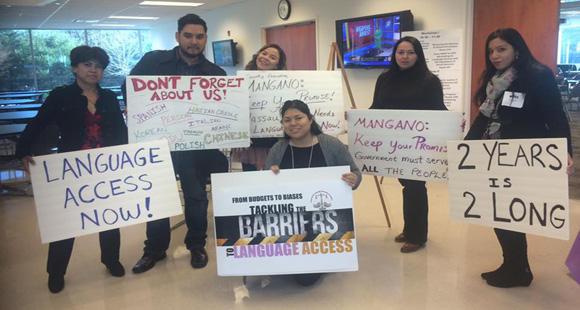 In Suffolk County, the Department of Social Services and the Police Department have made some noticeable progress; people have been making fewer complaints and they can get assistance to report crimes. However, more consistence and more training for the staff in other county agencies are needed, according to Keshner.

“Where we are seeing a lot of a gap is with people who speak languages other than Spanish, especially folks who speak languages that are less frequently encountered in this area, they often have difficulties getting the services that they need,” Keshner said.

On the other hand, Nassau County Executive Edward Mangano announced executive orders in 2013 to provide language access in all county agencies, but he has not complied with his promises.

“We have repeatedly tried to get his cooperation. He made a promise to the residents of Nassau County two years ago and has not followed through,” Keshner said.

But on the bright side, there have been meetings with the Nassau County Police Department, NCPD, and it seems they are serious about making progress, Keshner explained.

“They [NCPD] were very responsive to work with us and to make the necessary changes and invited us to do the testing with them,” said Maryann Slutsky, Executive Director for Long Island Wins, and member of LILAC. “They want to see for themselves where the deficiencies are and where more training and better implementation are needed,” she said.

LILAC’s annual conference is organized every year in honor of Ecuadorian immigrant Marcelo Lucero who died in 2008 as a result of a hate crime in Patchogue. Since Marcelo’s death, community organizations began to advocate for reforms that benefit immigrants.

After Marcelo’s death, his brother Joselo Lucero became a community leader for immigrant rights. “Barriers in language access create inequality that later can become a lack of opportunities,” Joselo said at the conference.

Various topics, such as education, were discussed in different panels during the conference.

“This concretizes the law that existed and makes more explicit that the registration process is supposed to be more flexible and broadly inclusive, that parents and students are not supposed to be kept out by unnecessarily barriers,” Starr said.

In regards of the conference, Starr said: “This is absolutely necessary. We are a community of immigrants. We have a richness of culture and language and we need to make sure that all of our community members can be fully integrated into our Long Island community and participate in our democracy and our economy.”