This is the second column by activist Omar Henriquez looking at immigrant participation in the Occupy Wall Street movement. To read the first column, click here.

I walked toward Zuccotti Park by way of Greenwich Street, passing the famous St. Paul churchyard, the one unscathed by the terrorist attack.

Right at the corner of Church and Liberty, a police crane was positioned. On top of it, a cubicle with tinted windows, constantly monitoring, filming and taking pictures.

It was October 4, and the police presence was everywhere, except inside the park. The infamous NYPD white shirts and the metal barricades stood out, but they didn’t stop the occupiers from undertaking their daily marches and actions.

It was inspiring to see the resolve of the occupiers, young people not intimidated by the police, or anything, really.

Just a few days earlier, about 700 protesters were arrested as they were marching across the Brooklyn Bridge. The result: Even more people came and joined the protest after that.

I first walked around the park, just observing and absorbing everything. I saw and read signs, lots of signs.

People were just sitting or standing around the park’s perimeter, holding the signs, talking to each other, engaging people in conversations about why they were there.

As I was wrapping up my second time going around the park, I heard someone shouting “mic check, mic check” and then saw people gathering around the person who had shouted.

What happened next is what happens each time someone wants to address the people. Cornell West, Michael Moore, and the rest, all have to rely on this method.

Since there are no mics, bullhorns, or sound system permitted in the park, the “mic check” is elicited. When attention is given, the speaker begins to talk in short sentences. The crowd then repeats everything the speaker had said, thus amplifying the sound, making it easy for other people to hear what’s being said or discussed.

Very ingenious, I thought. Another example of how the occupiers were dealing with any shortcomings or obstacles thrown their way.

Inside one of the park’s corner, where Liberty and Broadway meet, I noticed lots of books, and then I read the sign, “The People’s Library,” where people were reading and talking. I later met Erick, one of the movement’s librarians.

I had been at the park for close to five hours, and had already spoken to lots of people. Some were the original occupiers, others just supporters, and yet others just plain people, seeing how they could help and get involved.

I recalled Bryan, a young man in his early twenties. He had been there since the beginning. I was impressed by his commitment and world knowledge. He was my first contact and provided me with the answers to my questions.

I was well aware of the relentless media efforts to get the occupiers to state their demands, purpose, goals, message, and the like.

After conversing with Bryan it became perfectly clear to me. He told me what I have and everyone else involved in this movement been repeating since, “We are the 99,” meaning I am part of the 99 percent that have less than the top 1 percent. 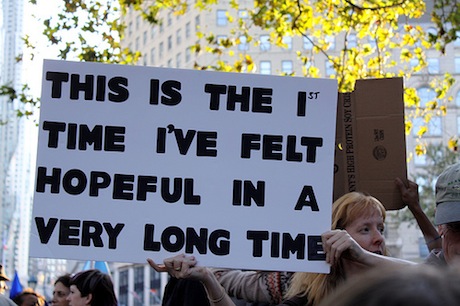 Is that the message? If you want to, was his response. “As an immigrant you are definitely part of the 99. The message is clear, we are here to imagine a new social, political, and economic alternative that offers greater possibility of equality.” I humbly asked this young man, how can I get involved and help? He told me and I did.

I started right away. My first collaboration was taking care of the signs. The signs are daily placed on the sidewalk for people to see and read. But most importantly for people to pick-up and walk around with them. My job was to keep them neat and to encourage people to walk around the park with them.

While arranging the signs, I found the one that vindicated this movement for me. It read: “This economy runs on the exploited labor of undocumented workers. Immigrant rights are human rights! ¡Ningun ser humano es illegal! 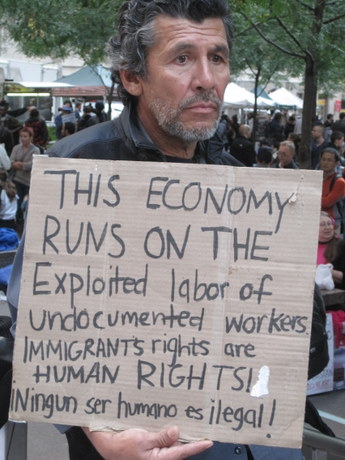 I was looking at a woman go by, with what I know were $1,500 shoes, not to mention her outfit. I get The Times on Sundays and see the advertisements. I just kept looking and thinking, “We have a lot work ahead of us.” (Photo by Jerry Ashton, Written Off: America and Americans)

I picked the sign and walked to the front of the park and held it. Many people passed by, read the sign, and nodded their approval. Others asked questions, lots of questions about immigrant workers.

Sometimes while answering, I raised my voice to be overheard, and would say, “You see all these beautiful skyscrapers, well, while you were sleeping, hundreds of immigrant workers were hard at work, vacuuming the rugs, cleaning windows and bathrooms. While you were sleeping, they were preparing the food you will eat today, that was also harvested by immigrants’ hands. Immigrants are definitely part of the 99 and Wall Street has been exploiting us for a long time.”

On some occasions pictures and videos were taken that have made it to people that otherwise would not know about our presence and participation.

I have been out supporting the movement many times since then. My son Max and my wife Liz have accompanied me and are supportive. I will go with anyone that asks, to Zuccotti Park or to other demonstration sites. We can learn together.

I was in the frontline on the Broadway side of the park one of the first times they threatened to evict us. Yes, us, since I feel I’m now part of this movement. I spent the whole night and morning just waiting, thinking, pondering, ready to get arrested. It was a sweet victory when they backed down. The parked had been cleaned during the evening, and has been kept clean since. And there were too many of us, 99ers.

I see more Latino and immigrant organizations making their presence felt. There is a Spanish version of The Occupy Wall Street Journal, and I make sure some copies find their way to Long Island.

As for the sign that I now always hold while at the park, I found in the most unusual manner who wrote it.

Once while I was holding the sign, a young woman approached me and asked me if I had written it. I said no. “You’re honest,” she said. “Well, I did not write it, but the message is great,” I told her.

She then told me that she had written it and we immediately went into a spontaneous embrace. I thanked her and asked for her name. “My name is Sarah,” she said. She was a young white girl with a spark in her eyes, the same spark, I thought, that started this movement.  As quickly as she said it she was on her way.

Sarah is part of the future I’m hoping for.