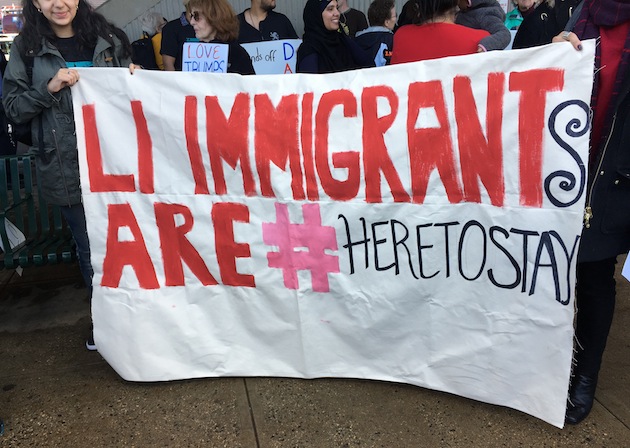 Nearly 100 immigrants and advocates rallied outside of Congressman Peter King’s office in Massapequa Park on February 24th. Organized by Long Island Wins, Long Island Jobs with Justice, and the New York Immigration Coalition, the goal of the march was to petition Congressman King to advocate for DACA recipients in Congress and to the current administration.

The participants marched from the Massapequa Park train station to King’s office, chanting “No hate, no fear! Immigrants are welcome here!” Once in front of his office, several speakers addressed the crowd sharing their own personal stories, messages of hope and support, and even some speaking to the Congressman directly.

“I want Congressman Peter King to go back to Washington and do his job,” said Nelson Melgar of Long Island Immigrant Student Advocates, “He is not the President’s cheerleader, he is our congressman. Stand up for your people!”

“I’m not going to apologize for the sacrifice my parents made to give me a better life and better opportunities, to be able to love this country and contribute [in] any way that I can to this country,” Laura Lemus of Long Island Wins told the crowd.

Around twenty counter-protests gathered on the opposite side of the street interjecting the speakers with chants, including “8 More Years!” However, those at the rally continued with their speeches, and even broke out into a rendition of “God Bless America.”

“I grew up listening to the words of Abraham Lincoln,” said Pat Young, program director of CARECEN and writer for Long Island Wins “Who told a group of immigrants in 1858, ‘The immigrant who comes to America and believes in democracy and works hard and believes in freedom is more of an American than the person who is descended from someone who came over on the Mayflower but is a bigot.'”

Advocates made note of how important it is to remain unified as a community. “I’ve seen hundreds of people across Long Island ready to act against racism, we’ve seen people stand behind the undocumented immigrant community,” said Angel Reyes from LatinoJustice, “We want to tell ICE today ‘Stop attacking our people!'”

You can watch the entire march below: