In Albany this week, proponents of marriage equality have been pressuring New York state senators to vote in favor of a measure that would allow same-sex couples the long-overdue right to marry.

Reports have said that a vote may take place as soon as this morning, which means that you should take a moment to call your local state senator and demand that they support marriage equality.

Long Island Wins intern Amanda Treco called around to the offices of state senators from Long Island, and she compiled a list of how they plan to vote and why:

District 1
Kenneth P. LaValle (R)
In the past he has opposed same-sex marriage, but he will entertain debate on the subject.

District 2
John J. Flanagan (R)
He voted against it in 2009, and as far as his office knew, his vote has not changed.

District 3
Lee M. Zeldin (R)
He is opposed. His office stated that he doesn’t want to change the traditional meaning of marriage.

District 4
Owen H. Johnson (R)
He voted no in 2009. His office says that he has not changed his stance.

District 5
Carl L Marcellino (R)
He is opposed. He has been opposed for 16 years, and it has been part of why he has been reelected.

District 6
Kemp Hannon (R)
He has voted in the past against it, but his office is not sure how he will be voting now.

District 7
Jack M. Martins (R)
His office did not comment on the issue.

District 8
Charles J. Fuschillo Jr. (R)
His office did not comment on the issue.

District 9
Dean G. Skelos (R)
Against the passage of this act. His office stated that his religious beliefs prevent him from voting for it. 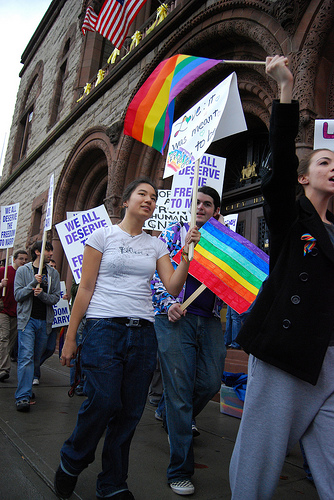