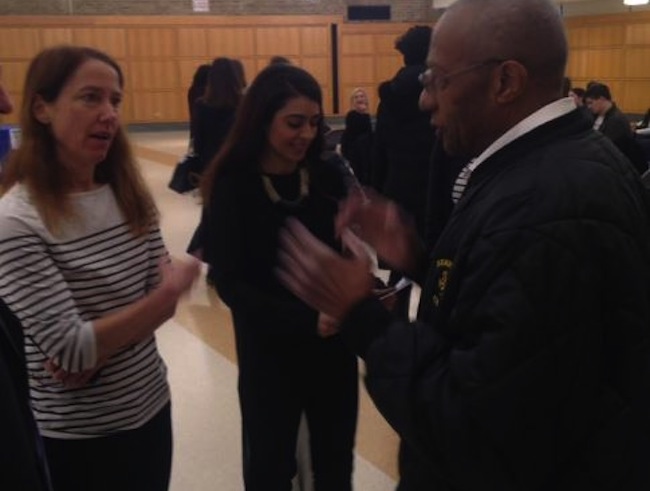 Over 200 Hofstra students and faculty gathered at noon on February 3rd to support the university’s Muslim students and express their opposition to the Muslim Ban executive order signed by President Trump just a week ago. Professor Sayeed Islam of Farmingdale State College led a prayer service of resistance to the targeting of Muslims by the new president. Hempstead Mayor Wayne Hall and Deputy Mayor Luis Figueroa were among those in attendance.

The special prayer service came a week after the announcement of the Muslim Ban by President Trump and five days after a terrorist attack in Montreal killed six Muslims. The Hofstra Muslim Student Association, with the assistance of Professor Lauris Wren, who heads the Law School’s Asylum Clinic, organized the service.

Professor Islam told the audience comprised of Muslims, Christians, Jews and others that “I want to thank you for being here, this is a true sign of unity.” He told the audience that Americans must remain committed to the truth in the face of “fake news,” urging them to resist bigotry and to stand together regardless of race or religion. He also said that it was important for Muslims to support the next group that is targeted by bigotry, reminding them that in past decades, Jews, Italians, and the Irish had all faced similar attempts at exclusion from America.

Professor Islam concluded by saying that “we are all people striving for freedom, and we must allow all in America to practice their religions freely.

Photos from Hofstra Prayer Service
1 of 4