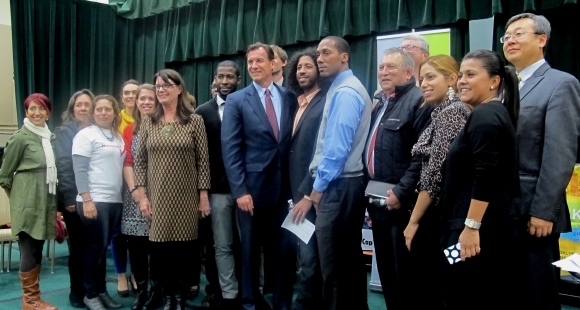 More than 300 community members gathered at the Circulo de la Hispanidad in Hempstead for “Growing a Diverse Long Island,” a historic candidate forum for Nassau County Executive. For the first time ever, candidates for County Executive had a platform to address the issues concerning the County’s working-class communities of color.

“Tonight is a historic night,” said Eliana Lopez, moderator for the forum and editor-in-chief of Noticia, Long Island’s Spanish language newspaper. “This is the first forum for Nassau County Executive to be held in a majority African-American and Latino community.”

“It’s about time,” Lopez added, which was followed by a round of applause by the hundreds in attendance.

“I’m very happy to be here tonight to talk to you about the future of Nassau County,” said Tom Suozzi, Democratic Candidate for County Executive. “We love Long Island. This is where our homes are, this is where our families are.”

Community members had the opportunity to interact directly with Tom Suozzi, candidate for County Executive.

One of the main issues facing immigrant communities on Long Island is Secure Communities, a federal program that has resulted in local police doubling as immigration agents. Because the majority of people deported under the program have either been convicted of minor offenses, such as traffic violations, or don’t have any criminal record at all, it has further damaged trust between immigrants and police.

“Police and government need to have a good relationship with the community, so that when something bad happens, you know you can go to the police and share information and be protected,” Suozzi said. “If you’re afraid of the police, then you stay underground.”

Suozzi mentioned that in his previous term as County Executive, he along with his police department and the federal government conducted an investigation of Immigration and Customs Enforcement, or ICE, because he suspected there were illegal raids being performed in the county.

“Our police are not here to work with immigration officials,” said Suozzi.

The forum Thursday night continued a dialogue that Long Island Wins, the Long Island Civic Engagement Table (LICET) and Noticia have begun fostering through their “Growing a Diverse Long Island” series of forums, which seek to bring the issues facing Long Island’s diverse communities to the forefront.

This year’s municipal elections will be critical for shaping the future of Long Island, be sure to get out and vote November 5.