We all know that there is a crisis in providing legal representation to refugee children on Long Island. There are 5,000 children in need of lawyers to present their cases in immigration court and only a handful of lawyers at non-profits able to help them. Americans were shocked when an immigration judge recently said he thought a three year-old could be trained to represent herself in court without a lawyer. This is the thinking behind a system where children go to court month after month without ever having a lawyer step in to insure the child gets her due process right of a day in court.

Two young lawyers in my office stepped up to try to raise money for the kids through weightlifting. You heard that right, weightlifting. 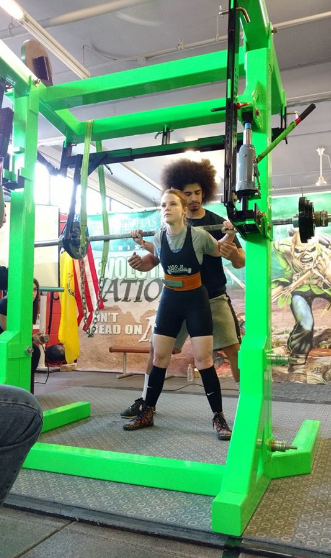 Elise Damas competing to raise money for the defense of refugee children through her powerlifting team The Barbelles.

CARECEN attorney Elise Damas was detailed from my office to serve as a fellow with the United Nations High Commissioner for Refugees to investigate the conditions of child refugees coming into the United States back in 2014. She interviewed many of the children in detention centers in the American Southwest. Elise said that the experience gave her “the ability to see the situation through the child refugee’s perspective. Children are the most vulnerable refugees and in speaking with them I got to understand the danger they experienced.”

Elise and attorney Danielle Alvarado decided to challenge themselves and Long Islanders by powerlifting weights in exchange for donations. They have been raising $300 per day since they started. Elise says that the idea caught on because she and Danielle are not people you would normally think of as weightlifters. “This is about empowering people,” she says, “we are two young women and no one expects us to lift great weights. The same with the children, they are unexpectedly empowered by legal representation.” 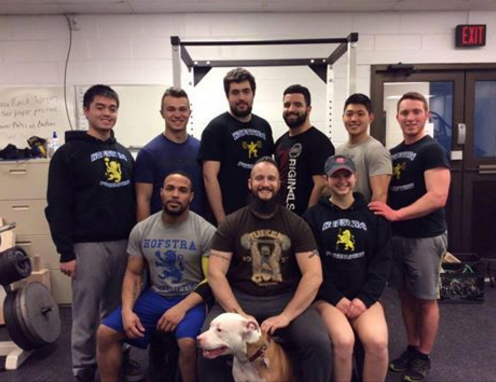 The powerlifters of Hofstra University were part of the team lifting weights to raise money.

Her powerlifting partner Danielle Alvadrado says that the campaign is so unusual that it gets Long Islanders with no connection to the child refugee situation interested in talking about the children’s needs. “Everyone wants the children to be treated fairly,” she said.

Elise added that among the happiest to donate are people who were immigrants themselves. “They can all imagine themselves as these kids,” she told me. 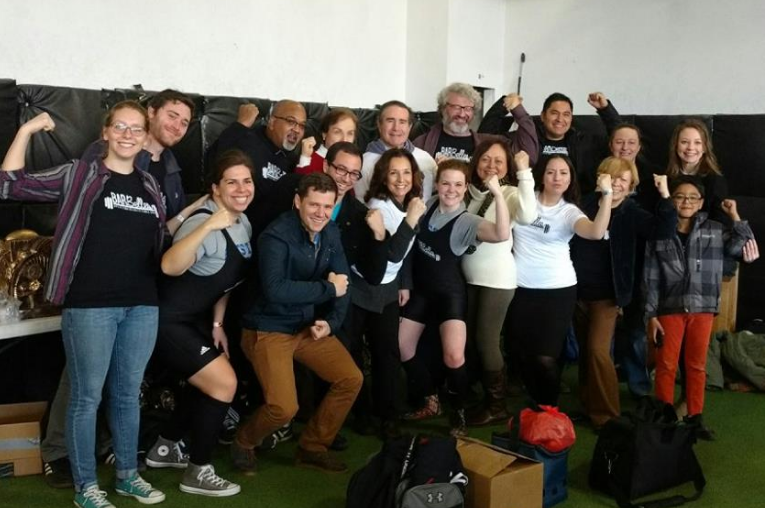 The Barbelles and their supporters.

But lawyers aren’t the only ones stepping up to the plate. So are kids.

A few months ago I was invited to speak to children at First Unitarian Congregation in Brooklyn. The kindergartners and first-through-fourth graders learned about refugee children and did a project in which they created welcoming cards for the refugees. 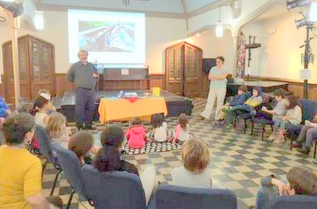 The Brooklyn kids wanted to make sure that the refugee children know that they have friends here who care about them. They understood right away that it is not healthy for a child to feel like an outcast. 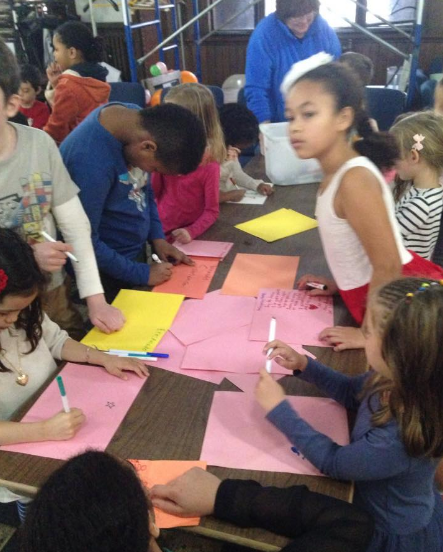 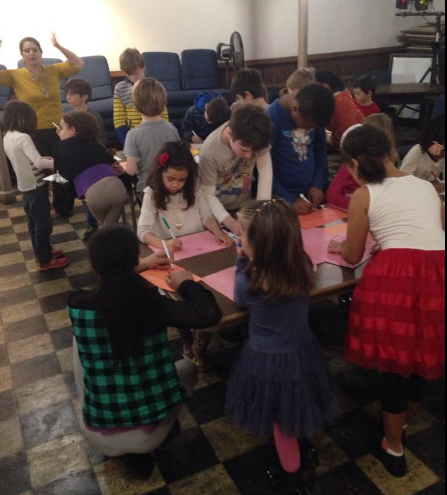 A few weeks later, I was invited back to speak with the congregation’s youth group. When the teens learned about the persecution the Central American children had fled, they decided that they wanted to help the newcomers. They knew that many of refugees did not have school supplies, so they organized an online effort for members of the congregation to donate backpacks, notebooks, pens and other vital materials. 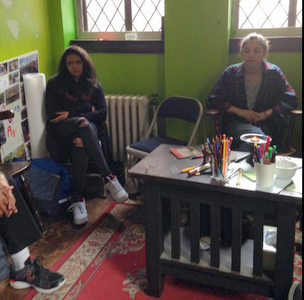 Working with several other Brooklyn churches, a mosque, and a synagogue, the teens gathered a remarkable collection of donations for the Long Island refugees. Then last week they assembled them into academic care packages. 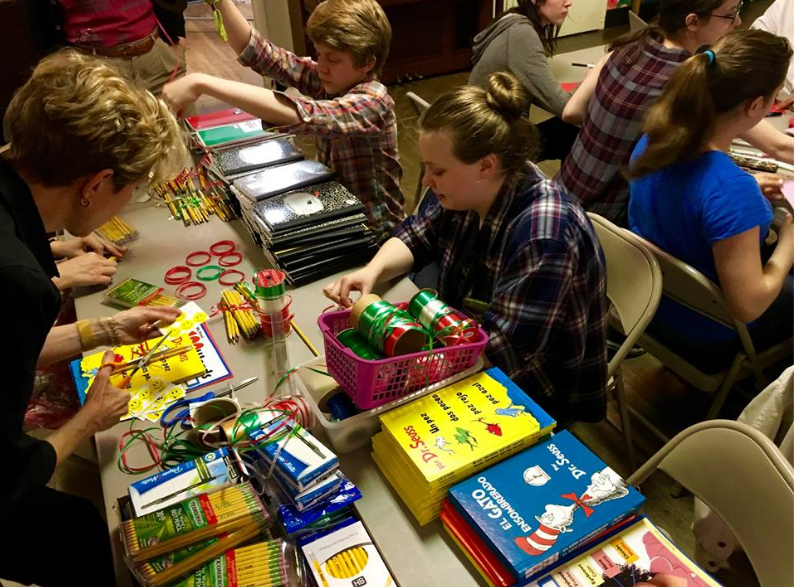 Director of Religious Education Meagan Henry worked with KatyAnna Johnson and Michele Ascione and a dozen teens to complete the Brooklyn Heights Interfaith Youth Service Project. They finished by inserting the cards the grade school kids had made in each backpack filled with supplies. 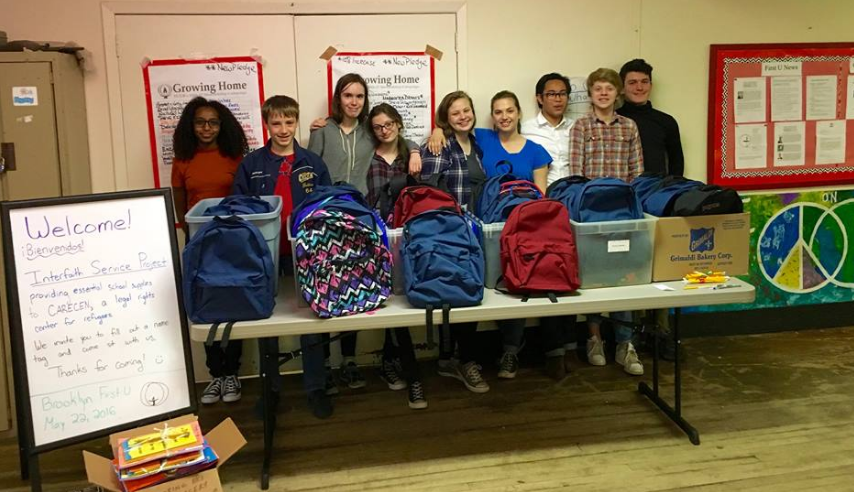 But the Brooklyn teens were not the only volunteers for refugee children. After I spoke to hundreds of students at Nassau Community College recently a number of them came by to offer to help us with translation services. 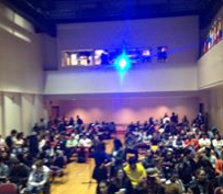 And then there was the magnificent congregation at Shelter Rock Unitarian which hosted a day for CARECEN, Catholic Charities, Hofstra and Touro law schools to present their projects for representing refugee children. The congregation gave $400,000 to the relief effort.

The news media too often focuses on those who hate refugee children. I have the pleasure of meeting the much larger number of Americans who empathize with them and want to help. 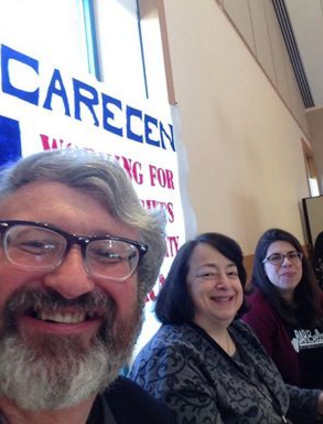