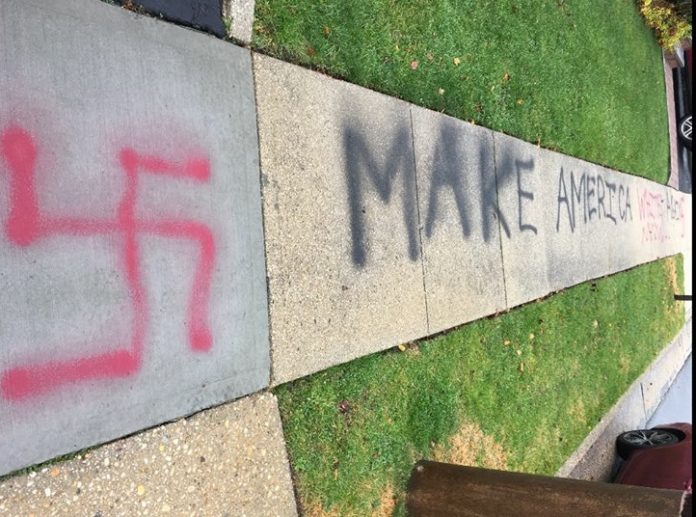 Yet another incident of hate in the form of graffiti was reported today in Mineola. On the corner of Washington Avenue and Elm Place, the slogan “Make America White Again” along with a red swastika and messages disparaging both African Americans and those of Middle Eastern descent were painted on the sidewalk in front of residential homes. Another incident of hateful graffiti was found on Elm Place with more swastikas. 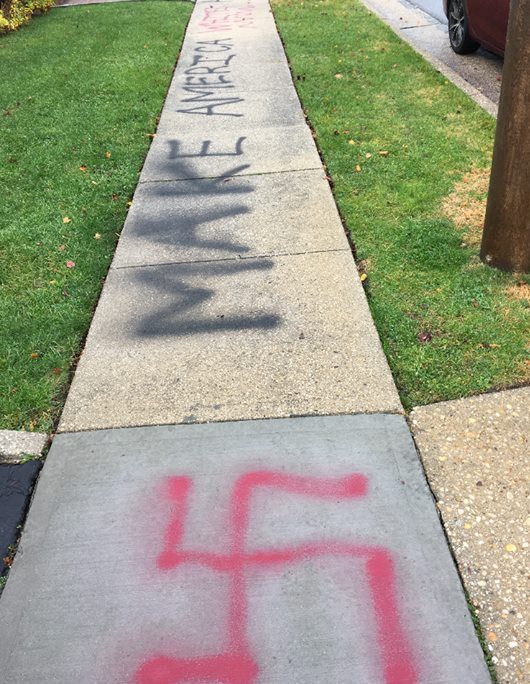 The Nassau County Police Department held a press conference concerning this hate incident on Monday, December 5th, stating that they currently had no suspects and have made no arrests. You can watch the official statement from the police here:

The hate graffiti was painted on the mornings of November 29th and November 30th. While there was surveillance footage, it was not high enough quality to identify the perpetrator. Detective Lieutenant Richard Lebrun, Commanding Officer of the Public Information Office said that the police did not know why the hate graffiti was posted there. He would not comment if the message was targeting the family on that particular street, though news outlets have reported that the family is Indian. The official statement on why the Nassau County Police Department chose to hold off on sharing this information until now was to avoid any copy-cat messages, but the investigation continues. Photos of the hate graffiti also circulated by private citizens on Facebook.

It’s not hard to see the connection between Trump’s infamous “Make America Great Again” and the words painted on the sidewalk. However, Detective Lieutenant Lebrun said that there was not a significant increase in biased crimes. The charges that would be brought against the individual or individuals who wrote these messages would be aggravated harassment and not for committing a hate crime.

There have been instances of swastikas being painted around the Stewart School in Stewart Manor, as well as on Stewart Street on October 25th. A second swastika incident occurred on the corner of Fernwood and Stewart in Garden City. The same area was also tagged with anti-white graffiti in early November, and as such, no group seems to be immune from these crimes. Thus far in 2016, there have been 48 reported cases of bias attacks, around the same amount as last year.

UPDATE (12/19/2016): On Saturday, December 17th, swastikas were drawn in the snow outside a residential home on Fairfield Ave. in Mineola. The police found five drawn in all across several locations, but no arrests have been made at this time.