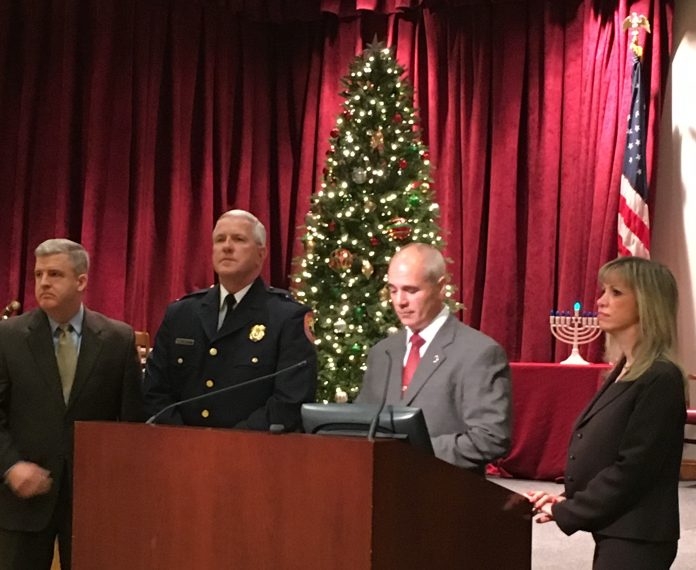 The Nassau County Police held a press briefing on Friday to address four incidents of hate graffiti at the Nassau Community College campus at East Garden City. All of the incidents including drawing swastikas on the walls of a building with either black and blue magic markers. The first three incidents occurred on October 15th, 28th, and 29th, with the final incident being discovered on December 7th on the stairway in the B Cluster Building.

Detective Lieutenant Richard Lebrun, Commanding Officer of the Public Information Office told members of the press of these four incidents, and reiterated that the crime was still under investigation by the Third Precinct, but that it is a Class E felony. A Class-E felony can include crimes such as theft, aggravated harassment, forceful touching, or property damage. Crime Stoppers is offering a $5,000 reward for any information that will led to the arrest of the perpetrator or perpetrators.

Detective Lieutenant Lebrun also continued to say, as he did last week during the press briefing for the Mineola graffiti, that there is no significant increase in bias incidents, going as far to say that there is a 21% decrease since 2015. Deputy chief of Detectives, Assistant Chief Neil J. Delargy, Deputy Chief and Patrol Executive Officer Deputy Chief Sean M. McCarthy were representatives of the Nassau County Police Department. Mindy Perlmutter, Robert Solomon, and Arthur Katz of the Jewish Community Relations Council of Long Island (JCRC-LI) were also present along with Brad Gerstman of Gotham Government Relations and Communications, though he was introduced as a “community activist.”

Over the weekend, another case of hate graffiti occurred in Hicksville. A young woman parked her car outside of her home on Thursday night, only to find it had been vandalized the next day, with both the windshield and tail lights broken along with the words “Trump” and “Islam” etched into the car. All in all, the perpetrator or perpetrators caused $3000 in damages, and will be charged with “criminal mischief,” which in this case would also be a Class-E felony due to the amount of damage.

When asked what people should do if people are scared to report an incident, Detective Lieutenant Lebrun encouraged the community to call Crime Stoppers and leave an anonymous tip. While the statement may help some, the reality is that parts of the community that do not feel safe enough to even reach out to an anonymous tip-line for fear of what police activity in the area might bring.

Solomon, the chairman of the JCRC-LI, talked about how these smaller incidents tie into the larger trends happening across the country that we need to be cognoscent of: “There are dangerous winds of hate, which are blowing across America. And whether its under the guise of alt-right or nationalism or Brexit or whatever you call it, things are happening that are exciting the passion of those people in this country.”

Update (12/17/16): One more incident of hate graffiti was found on December 16 in lower level men’s bathroom of the G Building. There was also a report of anti-Semitic graffiti at a 7/11 store in Merrick.