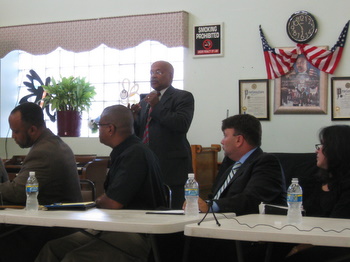 “They came in and they started to shut it down . . . all of a sudden it was, no, you are not doing that, no, that is not a hate crime,” Reecks told Newsday columnist Joye Brown.

In a January 23 column, Reecks describes a Levy administration and press department that whitewashed bias crimes and directly inhibited the work of the Suffolk County Hate Crimes Unit.

The U.S. Department of Justice is currently investigating discriminatory policing against Hispanics on Long Island, and Reecks also alleged that Levy officials pressured him not to speak to the Justice Department without a representative of the county executive present.

Det. Sgt. Robert Reecks, whose 13-year tenure as commander of Suffolk County’s hate crimes unit ended abruptly two weeks ago, describes himself as a cop who simply wants to do his job.

But he contends that his ability to do that job, to aggressively carry out the mission of his unit – solving hate crimes – was compromised by the administration of Suffolk County Executive Steve Levy.

It might be easy to dismiss Reecks’ views as rising merely from the bitterness of his sudden replacement in the unit where he is now deputy commander. But that would be selling Reecks and his years of experience short.

For more than a decade – through two police chiefs – Reecks was the most recognizable public face on fighting bias-related crime on Long Island.

“He told me what I needed to know, not what I wanted to know,” said former police Commissioner John C. Gallagher, who put him in the job in 1998.

In an interview with Newsday, Reecks, 56, described what he called an ever-tightening rein by the Levy administration on how cases were handled, as well as what information was provided to the public.

The change began, he said, soon after Levy won the county’s top elected position in 2004 – riding a local tide of anger against illegal immigration.

“They came in and they started to shut it down . . . all of a sudden it was, no, you are not doing that, no, that is not a hate crime,” said Reecks.

Levy, who describes Reecks as a “prima donna laying the groundwork for a lawsuit,” acknowledged that, for years, the administration kept a tight rein on Reecks’ work. And he said part of that effort was controlling communications from the division.

Reecks said he is not planning a lawsuit at this time.

Is Reecks a whistle-blower or a disgruntled employee? One thing is certain: He’s a man used to working within the framework of a police department, not willing or able to adapt to the county’s top elected official so closely monitoring his work.

Levy’s office killed or altered news releases designed to aid the division’s investigations, Reecks said, and sometimes failed to notify the public of solved hate-crime cases, such as that of a 20-foot swastika painted on the ground in Centereach.

Over time, every draft public communication from the division was routed to Levy’s office – mostly to Dan Aug, Levy’s press secretary – where, Reecks said, often they were sanitized of such language as “hate crimes.”

Levy said releases are sent to his office to give him a chance to comment; and that at one point police department policy changed so that hate crimes were to be investigated before the public was notified.

Reecks said that the choke on communications, however, directly affected the division’s ability to close cases. “It’s how we get leads,” he said, “how we get the word out, how we find other victims and how we let everyone know we’ve solved a case, which is important so people know this is serious.”

There came a time when Reecks, who often tells schoolchildren he would lock up his own grandma if she committed a hate crime, felt he was left out of cases he should have been investigating, he said.

He first learned about the racially divisive John White case by reading it in Newsday. “If I had been up there at John White’s house, those kids could have been locked up for inciting a riot,” he said. White was convicted of manslaughter in the fatal shooting of Daniel Cicciaro, one of the teens who had come to White’s house to confront his son. None of the teens were charged with a crime.

Police Commissioner Richard Dormer said the case went quickly to the district attorney’s office, and then a grand jury, which handed up charges against White.
Nearly three years later, Reecks said he was third on the list of interviews when the U.S. Justice Department stepped in last year to begin its ongoing investigation into the county’s handling of hate crime complaints.

He said county officials were upset that he wanted to speak with investigators alone – which he ultimately did. It was during that interview, Reecks said, that he asked flippantly whether the police department might punish him for speaking to federal investigators. The investigators’ response, said Reecks: Let us know if that happens.

On Friday, a spokeswoman for the Justice Department would say only, “The department’s investigation remains open and ongoing. We decline further comment at this time.”

Suffolk police officials said the only reason Suffolk wanted to have a representative in the interview was to “capture suggestions” through the Justice Department questions about ways to improve police work in Suffolk. He said officials learned only as the interview was about to begin that Reecks had wanted to speak to investigators alone.

As for retaliation? No, there has been none, Levy said.

One irony, Reecks said, is that he could have helped Levy. “I could make Levy look good if he would just let me tell the story.”

That hate crime patterns have been consistent in Suffolk County over the years, Reecks said. And that there continues to be fewer hate crimes against Hispanics on Long Island – even since Levy took office – than against Jews, African-Americans and gays. Most attacks are not on people but on property.

Levy and Dormer said they were surprised when Reecks abruptly quit a county anti-bias task force last week. They said he would remain second in command at the police department’s hate crimes unit.

Reecks said he left the task force after being called to account by his superiors for comments he made during two task force meetings.
He’s not quitting the police force, he said: “I’m a Suffolk County cop with a job to do.”