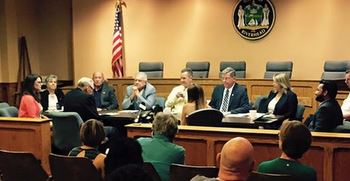 PANEL MEETS WITH RIVERHEAD TOWN BOARD
TO DISCUSS “ANTI-IMMIGRANT RHETORIC”

Last month several Riverhead Town Board members publicly called for town police to hold into custody anyone suspected of being an undocumented immigrant, with or without probable cause or warrant, which would violate civil rights, lead to racial profiling and create a “climate of fear,” according to panel members.

The meeting, which was open to the public, was held Thursday at 10 am with the Riverhead Town Board and a diverse group of experts, who presented different viewpoints in regards to the “misinformation” centered around comments made by Councilwoman Jodi Giglio, Councilman Gabriel Petersen and Councilman John Dunleavy in July. The meeting attracted about 50 community members and advocates.

Amol Sinha, director of the Suffolk County chapter of the New York Civil Liberties Union; Riverhead Police Chief David Hegermiller; Daniela Guillen, a Honduran immigrant who came here as a child and now works for Pathstone, a non-profit organization that helps agricultural workers; and Bishop Emil Aloysius Wcela, Auxiliary Bishop Emeritus of Rockville Centre, each presented legal and moral reasoning on why detaining people without a warrant or probable cause is unconstitutional and would put in jeopardy the public safety of the entire community.

The purpose of the meeting was to counter misinformation and anti-immigrant comments coming from the Town Board and to reach an understanding on why this kind of rhetoric is detrimental to the public safety of all community members.

“It doesn’t benefit anybody if significant portions of our community are fearful and untrusting of the institutions that are designed to serve and protect them,” said Sinha.

Although the Town Board was interested and concerned, when asked if the anti-immigrant rhetoric would stop there, town officials did not provide a definite answer.