Saturday, November 9, marked the fifth anniversary of the attack that left Ecuadorian immigrant Marcelo Lucero dying on the streets of Patchogue. Friends of the Lucero family and others from the community gathered in a small Evangelical church across the street from the scene of the killing to remember his life and honor his memory.

The church was a silent witness to the assault by seven young men on that cool November night. When I arrived there a day after the 2008 attack, Marcelo’s blood trailed past its simple frame, ending in a small stain in an alleyway across the street. The young killers were arrested just a few blocks away, in the act of fleeing the consequences of their horrendous deed.

Lisa Votino-Tarrant offered a few thoughts at the beginning of the ceremony. She was one of the first people to reach out to the Lucero family after the killing. By Lisa’s side was Gilda Ramos from the Patchogue-Medford Library, providing interpretation during the bilingual service. Gilda had helped translate the words of the first of the hate crime victims who came forward nearly five years ago and she had tried to warn local officials of the terror Patchogue’s immigrants had come to live with.

A young Jewish Ecuadorian immigrant named Francisco reminded the congregation that the day of the service was not only the fifth anniversary of the Lucero attack, it was also the 75th Anniversary of Kristallnacht, the Nazi attack on the Jews. We were there Saturday not simply to remember Marcelo, but to make sure that the politics of hatred were not allowed to take root and flourish in our country.

Patchogue Mayor Paul Pontieri said that Marcelo’s death “changed the direction of this village, this town, and this county.” Where many politicians had once cultivated hatred and ignored the abuse of immigrants, now the exploitation of prejudice for political gain was finally condemned.

“His sacrifice,” Nayyar Imam of the Long Island Muslim alliance said, “will never be lost.” 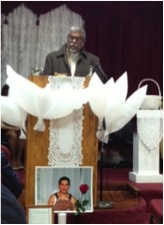 Nayyar Imam of the Long Island Muslim Alliance was part of a group of religious leaders from the Catholic, Evangelical, Baha’i, and Muslim faiths that offered prayers at the service for Marcelo Lucero.Poetic and musical reflections on Marcelo Lucero’s life were given by Charlotte Koons and thirteen year old Cheyenne Rosado, followed by prayers from local children. 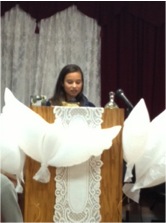 Junior High School student Cheyenne Rosado sang a song she composed called “Just Like Me,” which encourages young people to break down borders between themselves and understand the ways that we are all alike.Joselo Lucero, Marcelo’s brother, recalled when the police came to his home the morning after the attack. “When I found out five years ago that my brother was killed,” he recalled, “I felt like time stopped.” He said he “had seen my brother two days before and he told me ‘I want to start a family, I want to have a wife and kids, Joselo.’” Marcelo had worked his whole life after his father’s death when he was a boy to support his mother and his siblings. Now he finally felt he had the security to provide himself with a future. That future ended in a game of youths whose rules were written by callous adults; parents, teachers, “community leaders”, elected officials, and pundits. 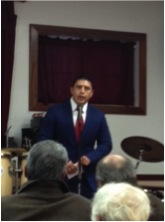 Joselo LuceroJoselo’s mother, he says, “died” on the day his brother was killed. Although Joselo himself has had to live with Marcelo’s death as a defining moment in his own life, he said that “it has been five years now, but it feels like forever.” He has used the time to speak out against hate crimes, bullying, and the targeting of the weak. But he and his family’s loss are always with him, even as the memories fix into the cold receding past. 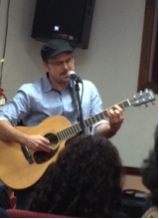 The assemblage processed out of church accompanied by Robert Bruey singing his tribute to Marcelo Lucero, “Perdoneme Hermano.” They sprinkled rose petals on the ground where Marcelo collapsed across the street.