Initially, the way I found out about the Occupy Wall Street protest was like mostly everyone else, through mainstream media. The reporting and coverage were dismissive and minimal. If you listened to media outlets like The New York Times, it was just a bunch of white kids with nothing better to do and no central message.

I remember saying to myself, more power to the protesters. To me, the message was clear: The richest people in this country are taking advantage of the rest of us.

And the location was perfect. Wall Street is the center of global economic power and the corruption that goes along with it. The culprits of the economic meltdown were being exposed, right in the belly of the beast.

As the second week of protests went by, images of young defenseless women being indiscriminately pepper sprayed and abused by the NYPD hit the airwaves. People across the country responded with disgust and anger, and they started to mobilize.

I began to think that I should go out there and find out more about the protest, but just like a true Long Islander, I dread going into the city if I don’t have to. If you drive in, parking and traffic are a nightmare, and if you are unfamiliar with the surroundings and public transportation, getting around can be daunting and expensive.

But in this case I knew the place very well. Zuccotti Park is located just two shorts blocks south of Fulton Street. After the 9/11 terrorist attack, hundreds of mostly undocumented immigrant workers gathered on that corner to respond to the clean-up effort.

I worked in the area for about six months. First organizing the workers, to demand higher wages, protective equipment, and training to remove the accumulated dust. And then later at a site a few blocks away, where with the participating organizations, we were able to procure a medical van to provide respiratory testing, information, and protective masks to the undocumented workers that had been and were working at the site. To date, all immigrant workers who were exposed to dangerous working conditions at the site, and who registered, are protected under compensation and other benefits.

Now, a decade later, the country was focused on the same area, just around the corner from Ground Zero.

Zuccotti Park, or Liberty Plaza Park, as it’s also know, is actually very small, about 33,000 square feet. Highly trafficked streets crisscross its north side park, with what could be considered the beginning or the ending of Broadway.

The park is unusual in the sense that skyscrapers surround it, its benches are marble, but its tiny dimensions are unassuming in a place where power, money, and glamour reign.

As the events kept unfolding, I decided to go. On October 4, I had to do a presentation for the Hispanic Solidarity Retiree Association of DC 37, one of the largest unions in New York City. Since their place is located just a few blocks from Zuccoti Park, I had a reason to go to the city and the park was just a short walking distance. 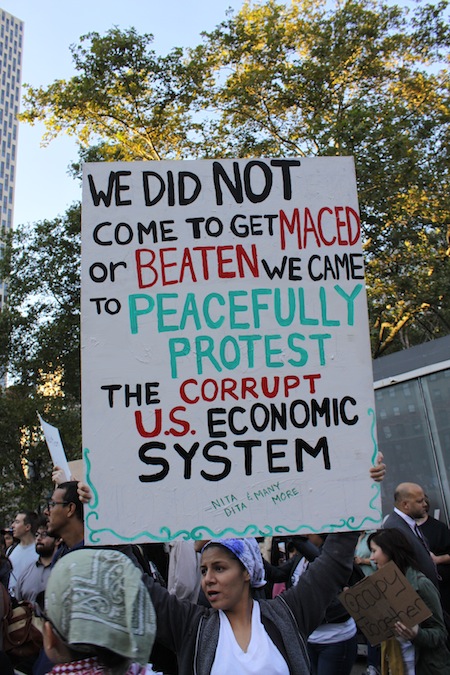 After my presentation, I began to walk towards the park. Memories invaded my thoughts, all kinds of memories. I remembered as I walked Barclay Street: the workers, their stories, their dreams and fears.

I remembered the response that a woman gave me when I was trying to organize them. “Omar,” she said, “it may be true that we may get sick as you say, that we are not getting paid what we should, but we are helping America, Omar, we are helping New York.”

Every time I remember that, I get emotional. It was with more intensity this time. I was back were it had happened.

Then, as I walked in front of the upsurging Liberty Tower, my thoughts jumped ahead five years to September 11, 2006. On that date, Panama Alba, another activist, and I organized the first and only event commemorating and recognizing the undocumented workers that perished in the terrorist attack. We brought a huge wreath, flower arrangements, and lit candles, and people responded with both repulsion and support. It has never been done again.

Coincidentally the same day I was heading to Occupy Wall Street, I received a call from Nelson Hernandez, asking me if we could meet at the park around six o’clock. Nelson is active in organizing the Salvadoran Day Festival and participates in civic events. He told me that someone had called him inviting him to the protest. I told him that I would wait for him at the park since I was going to be there. 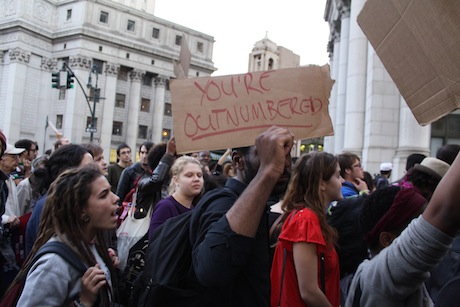 Photo by Ted Hesson.
The park looked different from the last time I was there. The trees were rooted and had grown, and instead of the usual pigeons and the well-dressed and attractive professionals, there were hundreds of people, all crammed into the small park, but also on the sidewalks and in adjacent streets. They were all supporting a movement begun by a bunch of kids who refused to be intimidated and refused to continue with the status quo in this country and the world.

But there was a caveat: I was alone, meaning I didn’t see any other Latinos or immigrants, at least at first. That was to change in the coming weeks.