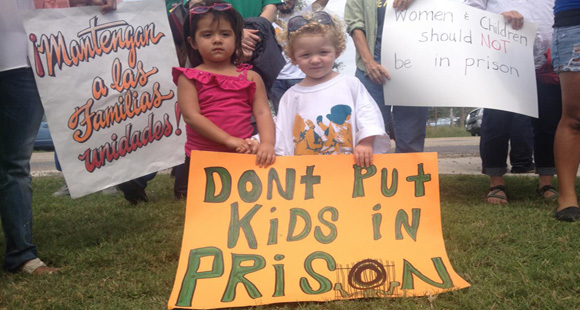 Over the summer, Federal District Court Judge Dolly Gee, ruled that the Department of Homeland Security was violating a court settlement agreement barring the detention of refugee children in jails.

The judge said that Homeland Security was detaining the children along with their mothers, in what were often deplorable conditions. She reminded the Federal department that children could not be held in prisons, but should either be released to their families or placed in licensed childcare facilities that are not jails.

Unfortunately, Homeland Security is trying to give the illusion that the children are not being jailed by having private prisons in Texas qualified as “licensed childcare facilities” by the State of Texas. Even though these private prisons don’t meet the established standards for childcare, they are being given emergency status as “family residential centers” so that little children can be placed in them.

These children are primarily from El Salvador, Guatemala and Honduras and they have escaped some of the worst human rights abuses in the Western Hemisphere. After the trauma they suffered in their homeland, and the danger of the trip north, they are now locked into jails with pretty names.

The continued abuse of the established rights of Central American children fleeing violence in their homelands is an embarrassment to the Obama Administration. It springs from a lack of will to stand up to Congressional conservatives and to craft a humane policy in compliance with the United Nations Protocol on the Treatment of Refugees. The United States needs to adopt policies that place the protection of children above political pandering.