This past week, the Labor and Industrial Relations Committee in the California State Senate voted in favor of a domestic workers bill of rights that would provide basic labor protections for those workers in California.

Now the legislation will move to the Fiscal Committee; if approved, the entire State Senate will then vote on it.

The organization traveled to Albany once or twice a month to lobby for the Domestic Workers Bill of Rights in New York State. During one trip I was given the opportunity to serve as an interpreter for a group of women.

As I walked down the halls of the capital building with the group, I clearly recall one woman, a Mexican immigrant in her mid-40s, who was not able to catch up. I remember asking myself, “Why does she walk so slow? Is she scared? Does she not want to be here?”

I found the answer later that day as I interpreted her story about abuses she suffered as a domestic worker.

She was forced to clean on her knees for hours, and now she could barely walk due to the excruciating pain she felt both in her knees and her feet. She endured verbal abuse while braving seven-day workweeks, with each day’s work lasting more than eight hours. Not only was she underpaid at her job, she was eventually fired with no warning.

Her basic rights were being violated yet there was no legislation protecting her and the approximately 200,000 other domestic workers in New York. My voice shook in an attempt to hold back tears as I had to translate her story for our meeting with a group of state senators.

That’s when I realized the importance of the Domestic Workers Bill of Rights, which was eventually signed into law in August 2010 by Governor Paterson.

That’s why the bill of rights was so important. It grants basic rights to a historically excluded group of workers: The right to overtime pay, the right to at least one day of rest each week, the right to protection against any form of harassment under New York State law. 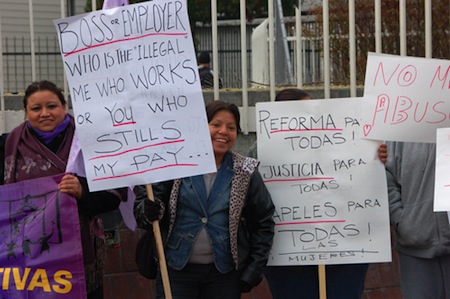 In the fight over domestic worker rights, we can see issues of ethnicity, gender, and immigration intertwine.

Many domestic workers – nannies, housekeepers, and caregivers for the elderly – are women of color. Many of them are immigrants. However, these women are often not viewed as regular workers. Due to the nature of the work, these jobs are perceived more as the duty of the woman, a holdover from a time when women were bound to the privacy of their homes.

Domestic work has been historically linked to particular socio-economic groups, such as indentured servants, slaves, or immigrants. In our current era of globalization, the work has often become a form of modern-day slavery, using immigrants, particularly Caribbean and Latina women, to provide the labor.

Considering this long history of mistreatment, I knew there would be opposition to the Domestic Workers Bill of Rights in New York. Prominent Republican leaders in the State Senate wouldn’t support the bill, including Long Island’s Owen Johnson (R-West Babylon) and John Flanagan (R-East Northport), saying they were reluctant to pass a piece of legislation protecting undocumented immigrants.

In their opposition, they failed to recognize the economic and social need for domestic workers on Long Island. They also ignored the motivations of the workers, many of whom are forced to migrate to the US because of free trade, privatization, and the extraction of agricultural and industrial labor in their countries of origin. Instead, these workers are label “illegal,” marginalized in our society, and thus susceptible to abuse and exploitation.

Who can forget Muttontown’s Mahender and Varsha Sabhani, a millionaire couple who enslaved two immigrant domestic workers for five years? The couple forced the victims to work long hours, starved them, and beat and tortured them.

Thanks to the passage of the Domestic Workers Bill of Rights, horrific cases like that can now be brought to the courts or reported to our labor department. Regardless of immigration status, workers can report abusive employers who violate their rights.

New York has already taken a vital step toward recognizing domestic workers and the importance of their contributions within our labor market, regardless of race, gender or immigration status. Now let’s stand by California, and aspire to see such a bill passed in every state.

Feature image courtesy of Jobs with Justice via Flickr.