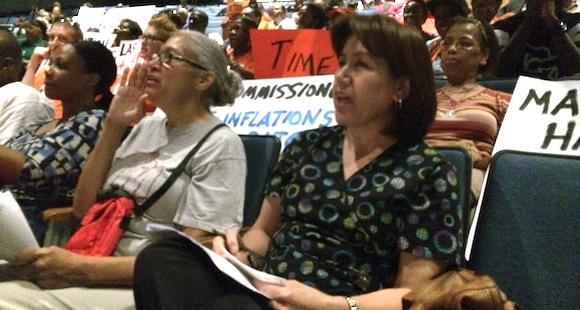 A memorandum to New York State Education Commissioner John B. King Jr. claims that a petition filed against disputed Hempstead School Board member Betty Cross is nothing but a “political scheme” by “sore losers.” It further argues that Cross should keep her seat as a trustee, refuting allegations of misdoing in the May 20 election.

The request was filed by school district attorney Austin Graff in direct response to the petition filed last month by Frederick K. Brewington on behalf of Maribel Touré, who has accused Cross of voter coercion, election fraud, and abuse of the absentee ballot system. Touré has asked King to remove Cross or invalidate her election.

“Unfortunately, the petitioners wildly allege that I coordinated a scheme to ‘steal’ my election by the misuse of absentee ballots,” she said. “The petitioners have offered no evidence, whether in the form of testimony or documents, that I was, in any way, involved in any improper vote, absentee or otherwise. I did none of the things alleged against me.”

Graff, in the papers, said Brewington made numerous technical errors in his petition, including the failure to name all involved parties.

He said, too, that the petitioner’s claims would require all election results be thrown out—not just those concerning Cross, the former board president who has been a trustee for most of the past 30 years.

He said in his memorandum that the petition was filed on behalf of “sore losers who worked hard, but not hard enough to win the election.”

Touré was one of seven candidates vying for two seats in the May 20 election. The district has long struggled with corruption and racial tensions between African-American and Latino residents. Had she won, Touré would have been the first Latino to hold a seat on the school board, despite Latinos representing more than 59 percent of the population. She ran as a team with Ricky Cooke, an African-American, as a symbol of the effort to end racial tensions between the two communities.

Long Island Wins co-hosted the Hempstead School Board Candidate Forum in May, along with the Long Island Civic Engagement Table and Noticia as part of the “Growing a Diverse Long Island” series. Cross no-showed the event.

Cooke and Touré were the highest vote getters, respectively, and were declared winners on the evening of the election. However, the next day Cross presented 31 absentee ballots, which put her ahead of Touré by six votes. Cooke’s election is not being disputed.